The Brothers’ Coin by Donald A. Beaton 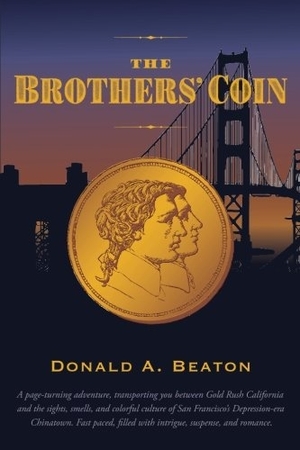 Italian brothers Enrico and Alfonso Agostion have big dreams. Trained as master coin minters by their father, they leave for the new world to make their fortunes just a few years before the gold rush of California. Settling in, they prove themselves to be savvy entrepreneurs, dipping their fingers into the lumber business and, of course, the gold rush. Instead of trading in their gold and announcing the presence of it at their ranch, however, the brothers use their talents as coin minters to turn their findings into coins. They then hide the coins so well that years later, all that remains is the legend of the Brothers’ Coins. In 1932, San Francisco P.I., Duncan Alester, is setting his sights on finding out if the legend is true. Hired by the head of a Chinese gang, The Empress, he begins looking into the rumors and soon sets off on a search to find the coins themselves. It turns out to be a more dangerous job than he realizes and he must play it smart to find the coins and survive or risk becoming a legend himself.

The Brothers’ Coin by Donald A. Beaton starts out with a great concept: following an old San Francisco legend and tracking it in both the past and the future. The book alternates between the experiences of the Agostion brothers as they are making their fortune and with Duncan’s investigation of the legend and the coins. The main plot is an enjoyable one for both sides of the story and the overall story arc is satisfying to the reader. Where the story falters are primarily in two areas: the subplots and the dialogue. This story has a lot of subplots, both in the Agostion brothers’ story and in Duncan’s. Some of them work with the overall storyline and some distract from it altogether. In particular, the ongoing threats of danger from thugs in both areas of the story go on way too long and do not add the sense of danger or urgency they are supposed to add. Instead, they seem to serve as a way of prolonging the main story arc from its resolution. There are also a lot of scenes in the book where the Agostion brothers buy supplies. These scenes do nothing to add to the reader’s understanding of the plot or the characters and did not need to be included for the story. The other subplot issue is that of a conflict set-up between the brothers early on, related to both love and Alfonso’s desire to be out of his brother’s shadow. Despite this being a prime plot point to explore, it’s set up and then never addressed again. The content of the dialogue throughout the book is fine; it typically serves a purpose and helps move the story along. But the actual dialogue comes off as oddly formal, awkward, and unnatural; this is particularly true with the brothers’ dialogue. Even accounting for English being their second language, their interactions seem stiff and forced rather than natural. It tends to take the reader out of the book. Overall, The Brothers’ Coin, does have quite a few good spots but could have used some editing as far as storyline subplots and dialogue.