The One Inside by Sam Shepard 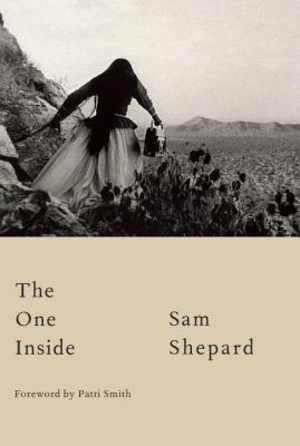 Sam Shepard is the Pulitzer Prize-winning author of more than fifty-five plays and three short story collections. As an actor, he has been in over sixty films and was nominated in 1984 for an Academy Award for his role in The Right Stuff. The One Inside is Shepard’s first foray into novel writing and it is a funny, cerebral, and hallucinatory novel that feels simultaneously personal, poetic, and contemplative.

The book is broken up into small chapters, only a few pages long each. They are given titles like “The Tiny Man,” for a piece about his dead father’s body, or “Succubus,” a piece about a small being crouched on his chest in what might be a nightmare. Each of the small sections feels a like fever dream filled with psychedelic detail, intimate information, vulnerability, and wonder.

In an early chapter, titled “Felicity,” his father is having sex with a young girlfriend. The narrator, either still a child or maybe fully grown, is able to make it into the room unseen. He hovers around the two lovers. The whole thing plays out like it is nightmare or maybe it is just an intimate confession. Questions are left hanging. How do these two not see the narrator? Why are we being told this? The book gives us scenes like this one that are soberly wandering through the strange.

The narrative eventually settles around a few plot lines, one about his father, another about Felicity, and one grounded in the present having to do with the narrator’s relationship with a young girl. The small chapters weave in and out of each and at times a digressive chapter is worked in. As the narratives progress, some of these stories are more compelling than others. The layering makes each important, but as the story comes more into focus the narrative loses the grip it had from the start.

Shepard’s prose is always sharp and when he hits his stride he does an incredible job in showing us the strange and haunting scenes of life in vivid economic prose. The One Inside is a good book that at times, especially at the start, is a great one. Shepard has written a novel of the small intimate stories that we keep inside and don’t forget. The One Inside is about the episodes of life that aren’t neat and tidy enough to tell, but beg to be told anyway. Shepard’s words come out like an honest ache and are definitely worth a read.