The Origins of Benjamin Hackett by Gerald M. O’Connor 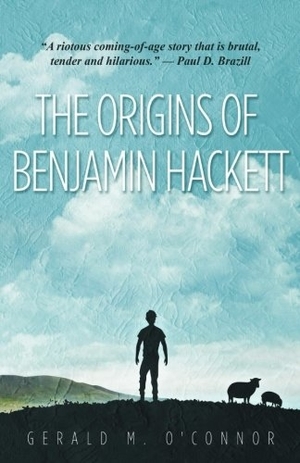 Benjamin Hackett thought the worst thing that could happen to him the day after his 18th birthday was muddling through the day with his sizeable hangover; he was wrong. Finding out he was adopted and that his Catholic, God-fearing parents hid this from him until now, Benjamin is determined to find his birth parents to punish them for abandoning him. Benjamin and his best friend, JJ, head off for a three-day journey of a lifetime.

Prospective readers should be aware that The Origins of Benjamin Hackett takes place in 1996, in the country of Ireland. As such, certain terms and slang, the obsession with hurling (a sport most Americans will never have even heard of), a distinct lack of social media and cell phones, and the younger drinking age may throw readers at first. However, it’s not difficult to feel for Benjamin and sympathize with his anger, confusion, and desire to know the truth of where he comes from.

The book doesn’t waste a whole lot of time on characterization – there are no paragraph strings of descriptions to slog through. Instead, everything is organically drawn from the conversations held and Benjamin’s own observations. Despite the expected teenage idiocy, the story never devolves into an angst-ridden brood fest, something many Young Adult books are guilty of being. Truthfully I’d categorize the book more in the New Adult genre due to the surprising maturity of the characters given their ages, a lack of focus on romantic entanglements, and the dramatic and believable changes both characters go through over the course of several days.

The only part that lessened my enjoyment of the story wasn’t anything to do with the writing itself, but instead the formatting and layout of the physical book, which felt a tad bit amateurish. As a reviewer who reads around 100 books a year, this is something that stood out although many readers will likely not notice the issues.

The Origins of Benjamin Hackett is an enjoyable read about one boy’s coming-of-age story. The adventure dealing with self-righteous nuns, scam artists, and several close calls will keep readers happily turning the pages. In the end readers will all wish they had a friend as loyal and steadfast as JJ, and will hope that any roadblocks in their own lives can be navigated with a bit less chaos than Benjamin’s.