The Dangerous Ladies Affair by Marcia Muller and Bill Pronzini 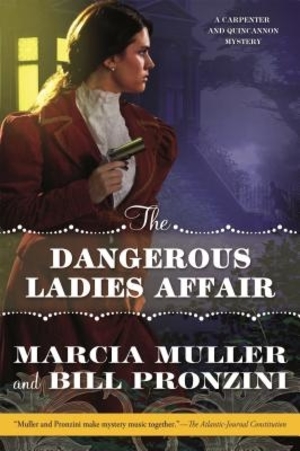 This novel is the fifth in the ongoing Carpenter and Quincannon mystery series. Both part of a detective agency, Sabrina Carpenter and John Quincannon are off on two different cases. Sabrina’s bicycling friend, Anna Wellman, has a problem. She is well known in her San Francisco community for her active role in Women’s Rights and is a delegate for the California State Women Suffrage Convention being held later in the year of 1896. Threatening letters and a stray gunshot in Amy’s garden are enough to convince Sabrina that her friend needs her help. John is sent on a quest to retrieve money from an extortionist who is pestering a wealthy bank in the city. As John follows the courier, in a matter of minutes, a murder has been committed. Following some leads, John finds himself taking an unpleasant riverboat ride, leaving Sabrina to hold the agency together in his absence. John is determined to solve his case, retrieve the money, and return home to his comfortable life.

Although I have not read the previous four novels in this series, I was easily able to read The Dangerous Ladies Affair as a standalone book. The story does have a bit of a slow start, so it took a little bit more reading to get into the story. Readers who enjoy historical fiction will enjoy the historical references throughout the story. The mention of women’s suffrage and bikers wearing bloomers and knickerbockers help frame for the story and settle readers into the time period. Sabrina comes off as a very strong character, particularly given the era the book takes place, considering she carries a gun, knows how to use it, and still look pretty in her long dresses. The old-fashioned words used in the writing were a nice touch.