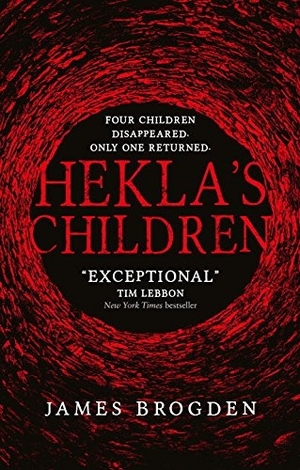 In a time of ice and starvation, a demon with the power to take over human bodies hunts the children of a bronze-age tribe. Enough, they finally said, and called a truce with their neighboring tribes. Trials by combat found the greatest warrior in the four valleys, and through ceremony the tribes placed him in the spirit world, trapping the demon.

In present day Britain, four children vanish while on a hiking expedition. Only one returns, seemingly with no memory of what happened to the others. The disappearance haunts their teacher, who, frozen by guilt, is unable to move forward with his life. Unexpectedly, he is pulled back to the scene of tragedy when a body is discovered near there – the body of a bronze-age warrior, a body that somehow is connected to the missing students.

Hekla’s Children, by James Brogden, follows in the footsteps of Picnic at Hanging Rock – or more specifically, the unpublished final chapter of Picnic at Hanging Rock, in which all the mysteries are revealed. Unlike Picnic at Hanging Rock, which embraces mystery and the unsolvable, Brogden pursues more of a metaphysical adventure tone, heading from a pensive, relationship-oriented beginning – with a little Kathy Reichs anthropological flavor – into pure dark fantasy territory. While Brogden’s meditations on how the weight of the past shapes the present and his imaginings of what a spirit world might look like are interesting, Hekla’s Children lacks the hypnotic pull of Picnic at Hanging Rock, probably because it reveals all its secrets. Readers might also feel that some of the character development is unsupported by the text, as personalities shift in unexpected ways. Perhaps the shifting points of view and tones of storytelling undermine the novel’s ability to firm its own identity, reducing a great premise to merely a good read.