In Black & White by Catherine Lavender 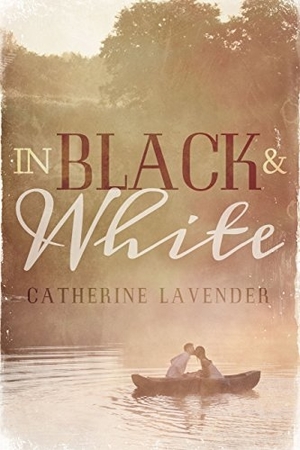 Micah Winters has struggled all her life with feeling like she didn’t belong. As a biracial child born in the sixties, life was made more difficult by not knowing the identity of her father. Fifty years later she is shocked to discover that her father – a successful and wealthy author – had named her as his sole heir. With her mother’s faculties deeply affected by Alzheimer’s disease Micah had given up learning his identity. She now has the chance to learn why her father had abandoned her mother. Micah owes his legacy nothing and is tempted to take the money to support her new business venture and walk, but are things as simple as they seem?

In Black & White is simultaneously a complicated, and yet a very simple novel. It is a love story between a White man and an African American woman during a time when racial segregation was at a political boiling point in the United States, as well as the story of a woman coming to terms with her complicated upbringing and her uncertain future. Catherine Lavender does an excellent job depicting Micah’s emotional struggles while uncovering facts that conflict with beliefs she had held for fifty years.

There are some definite fairy tale elements to the narrative – rags to riches and happily ever after tropes are the primary ones – but these do not distract from the overall message and enjoyment of the book even as they may make things a bit cliché. The book is an easy one to get through (despite the often serious and somber subjects), and readers should be able to finish it over the course of an afternoon or two. This is a poignant novel given the current political climate and the ongoing difficulties faced by biracial children even to this day – one that condemns racism, but in a way that is also understanding of the political and societal beliefs of the time.

I will say that the second half of the book is weaker than the first half and seemed to receive less editorial attention than the earlier chapters in terms of pacing and other grammatical issues. The book also wrestles with inappropriate tenses (present where it should be past) throughout. The climax of the book arrives suddenly, and doesn’t quite work for several reasons that are potentially spoiler related, so I won’t discuss them here. Luckily none of these issues are severe enough to drive away most readers, although the book could certainly benefit from another round of editing.

In Black & White is a charming novel, but with some extra polish could become something really special.