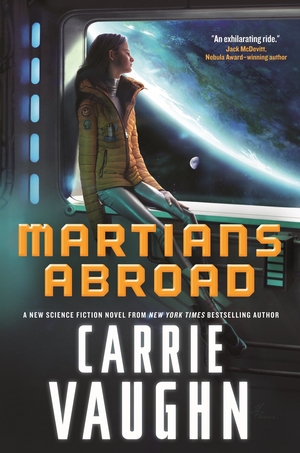 Polly and her twin brother, Charles, live among other Earth transplants on one of Earth’s many off-world colonies on Mars. Polly fears her plans of becoming a pilot are ruined when her mother, the director of the Mars Colony, forces them to attend school on Earth. Despite the new opportunities the elite academy, Galileo, offers, Polly is resentful of this displacement. Isolated and antagonized by the students from Earth, Polly, Charles, and the other off-world students form a close knit group. However, they soon learn that hostile classmates are the least of their concerns when a series of mysterious accidents plague their school field trips. They’re playing a game they didn’t sign on for; one misstep could be deadly.

Though the story begins at a slower pace, it eventually picks up. Polly isn’t initially the most likable character. Her reactions, however justifiable are usually immature. As the story progresses her more agreeable qualities become apparent, garnering empathy. It also doesn’t hurt that she is new to Earth, Galileo, and is a teenager. Though protagonist’s who are “fish out of water” are somewhat overused, it’s effective here. The story is perhaps most interesting due to the futuristic world Vaughn has created. She interweaves details of this world throughout the story in an unobtrusive and intriguing way.

Though this will certainly appeal to fans of young adult science-fiction books, it might disappoint plot-wise. For a story that spent so much time leading up to the culmination of various threads and plots, the ending was anticlimactic. It felt rushed since everything was wrapped up in only a few pages. It wasn’t satisfying and would have benefited from a lengthier climax and conclusion. The ending also raised doubts about the plausibility of the circumstances and the motivations of characters. However, Vaughn does leave the door open for a sequel, which could hopefully clarify confusing elements of this book’s plot.