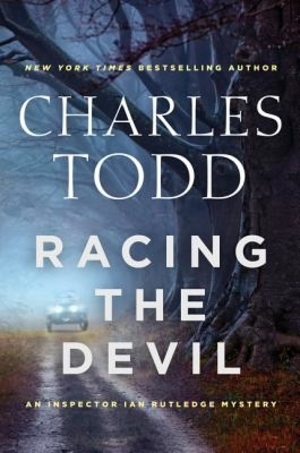 In rural England, shortly after World War I, Scotland Yard’s Inspector Ian Rutledge is called in to solve a series of suspicious deaths amongst a small group of men who drove fast and fancy motorcars. A year earlier, on the eve of the bloody Battle of the Somme in France a group of English officers who barely knew one another had met over drinks and vowed that if they survived the war they would meet a year later for a road race from Paris to Nice. The result was that one was killed in a crash during the race, then one after another met doom or had suspiciously close calls on roads back in England. Are they deliberate murders, or a series of uncannily similar accidents? The evidence is unclear, but worthy of the Inspector’s unique talents as an investigator.

Inspector Rutledge mysteries are sometimes compared with the likes of Sherlock Holmes, complete with a helpful Watson-like character. The inspector’s Watson is an alter ego in the guise of a friendly and eminently wise ghost-like chap, often heard but never seen, who unobtrusively helps guide Rutledge. This friend, who whispers cues, clues and warnings to Rutledge from behind has a name, Hamish MacLeod, and speaks in a rich Scottish brogue. As the Inspector finds that the men (both the dead and the living) involved in the motorcar mysteries each carried some of the weight and guilt of surviving the war, the Inspector knows that he, too, is mildly bedeviled by his own battlefield experiences, as Hamish MacLeod occasionally reminds him.

Racing the Devil is splendidly sharp-witted book and a pleasure to read, all the way to its unexpected conclusion. As a reviewer (and a writer myself), I tend to read books analytically. Beyond the mere pleasure of the read, with exceptionally good books I inevitably look behind the words to analyze the author’s writerly skills and intentions, silently asking why and how, what motivates them, and what’s next. Early in this story, while the Inspector is attempting to determine what brought the men together to race to Nice, he interviews a woman, Emily Stuart, who was once engaged to one of them, a man named Standish. Their chat takes place over tea and cakes, in an exchange that demonstrates both the author’s sense of sleuthing and plotting:

“’You said he was meeting friends in Paris. When was this?’
‘Almost a year ago. He’d told me they were friends from the war, and that he had promised he would be there.’ She crumbled the edge of her untouched pastry and pushed the bits across her plate. ‘A cousin said something once during the war, that men who lived so closely together and faced such horrors each day shared a bond that had nothing to do with friendship or blood. They counted on each other to survive, and they depended on each other not to let the side down.’
‘I remembered that, when he said it was a promise he had to keep…. [I]t was something that mattered to all of them – to meet in Paris if they survived the war. It was very important to him, I could tell. Very personal. He didn’t want to talk about it very much.’
Then, without warning, Emily Stuart reached for her coat. ‘This was wrong. I shouldn’t have told you these things. You listen too well – and I needed to talk to someone. But not to a stranger.’
Signaling for his bill, he said, ‘Sometimes strangers are better.’”

Farther into the story, after learning more about Standish and the others, Inspector Rutledge mulls it all over:

“No one was ever what he or she appeared to be, he thought…. Everyone had secrets – even he had them, hiding his shell shock from friends and enemies alike….
Standish had them. … But whether murder was among them, only time would tell.”

Racing the Devil is the 19th Ian Rutledge Mystery. Author Charles Todd has also written eight Bess Crawford Mysteries, and a few others. He’s a good writer, able to keep his readers in suspense from start to finish.

About this one, what else can I say? It’s a good story, and if you like solid, well-plotted mysteries, here it is. But, then, if you’ve read other Ian Rutledge mysteries you already knew that.