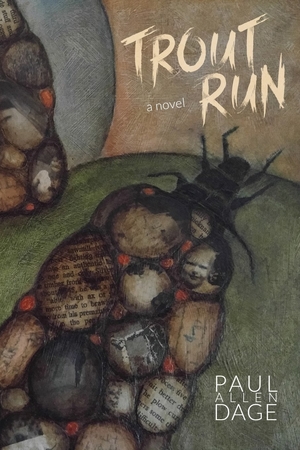 Trout Run, the second novel in Paul Dage’s Eddy Trout trilogy, continues his main character’s story where the first novel, Trout Kill, left off. Without spoiling too much of the plot of that novel, it centers around a man, Eddy Trout, age 47. He lives in Milo, Oregon with his wife, with whom he has fallen out of love, and leads a rather impulse-driven existence. He’s prone to outbursts of violence and loves taking risks; he smokes too much weed, drinks too much alcohol, and processes his emotions more like a teenage brute than anything else, in spite of his sensitive soul. His sister, Em, three years his senior, is an addict and mentally ill, and his concern with taking care of her often overpowers his very real, but buried need to take care of himself. In Trout Kill, when a dying man claiming to be their long-departed father appears, it sends Eddy into a tailspin, resulting in him following the dying man – a former logger with the soul of a poet, and the person solely responsible for Eddy and Em having been raised, and horrifically abused, by their uncle – to the latter’s house with the intention of killing him.

When Trout Run opens, Eddy is searching for Em in Portland. She’s disappeared and he fears that she is dead. He’s also reading a book written by his father, ostensibly a novel, called Night Drives, which tells the story of its author as well as his family – children included. It tells some hard truths that threaten to destroy Eddy, all the while providing him more insight into his background and why he is the way he is, although he doesn’t seem very open to receiving it. An interesting cast of characters is introduced in this novel, too; Em’s friends from the street, various thugs, addicts, and the mentally ill; the proprietor of a charity-diner that would like to give Eddy much more than just a hot meal.

When Eddy is finally able to track Em down, he discovers that she’s back in their hometown, the scene of their childhood abuse, and goes on a mission to rescue her. Taking his friend Ernst, an almost Henry Miller-like poet bum who grows weed and makes Pinot Noir, along, Eddy finds his sister and tries every bullheaded way he can to convince her that he knows what’s best for her and that she should follow his lead. And all the while, the mystery of their shared past – as well as the mystery, a few hours’ drive away, of what happened to their biological father – begins to unravel and, in some ways, only deepens.

Eddy Trout is the most frustrating protagonist this side of Holden Caulfield – and it’s still a mystery whether or not he’s actually the hero of these novels about him, or whether he’s a sort of antihero/quasi-antagonist floating along and doing ever more damage to his already upturned life. His interactions with people, from his sister’s no-good drug dealer husband to people he hasn’t seen since high school, are suspicious, aggressive, and confrontational. He resorts to violence with a quickness that does nothing to make him more sympathetic and his constant caretaking of Em is condescending, an irritating sort of mansplaining/mother hen combination – in fact, in a clever play on words, one of Em’s nicknames for him is “Brother Hen.”

With this book, Paul Dage has once again proven that he is a true author, and one with something to say. His spare prose and his rough-and-tumble characters, while not reflecting of anyone I know, tend to engender a level of empathy, and the reader wants the best for them. At least for the most part. In some ways, the novel, and Eddy Trout’s journey throughout the first two books of this series, seem to be a meditation on a question Eddy poses about two-thirds of the way through the story: “How can you ever become a whole grownup if you weren’t a whole kid first?”

Trout Run is also a meditation on family, on the sins of the father and how they carry on to future generations, shaping the lives of those who follow and whether or not they’re escapable – whether or not we’re more than mere products of our families and pasts. Likable or not, it’s impossible not to wonder what Eddy Trout will do in the future, as his story progresses. I’m sure Dage has big plans for his character. Perhaps even redemption?