Any Day Now by Robyn Carr 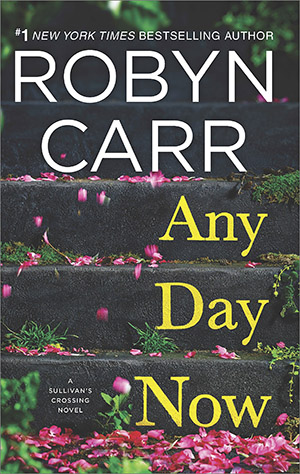 Any Day Now is the 2nd novel in the Sullivan’s Crossing series by Robyn Carr. It is not necessary to have read the first book in the series as this is a stand-alone story. Sierra Jones has recently left rehab to sojourn with her brother Cal and his new wife, Maggie, in Colorado. Determined to get her life back on track, ahe settles into working at the campground near the Continental Divide trails and enjoying spending time with Sully, the owner, who is also Maggie’s dad. Staying sober has not really been a problem for Sierra but parts of her past do seem to haunt her. Sierra finds some peace when she rescues a puppy from an abusive camper and finds solace in the trails when she takes walks with her newfound canine friend, Molly. On one such walk, she sprains her ankle and is rescued from the trail by a shining knight of a firefighter! Conrad eventually manages to steal her heart, but Sierra worries and tries to put off courtship because of her painful past. Will Sierra be able to find love and peace at Sullivan’s Crossing?

Robyn Carr has written a novel that speaks frankly about difficult topics including alcohol addiction, rehab, and stalking. It also touches on the shame felt by victims of rape. It is a well-written and realistic story that handles these issues with an inspiring touch. She has introduced an extensive cast of characters for this next chapter in this series. The character Sierra is written as a person who finds her inner strength so she will not remain a victim of her past. The location is described as a beautiful rustic campground, a place of dreams where lives are changed or renewed. Any Day Now is filled with intrigue, suspense, and romance. Robyn Carr fans will not be disappointed.