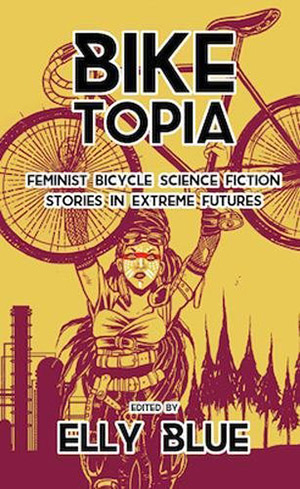 There’s no question as to what the book Biketopia: Feminist Bicycle Science Fiction Stories In Extreme Futures is about. It serves as a collection of short stories, focused around the concept of a tumultuous future with, as one might glean from the title, feminist overtones and the reoccurrence of bicycles. The text contains thirteen contributions. While the main bulk of Biketopia is made up of short stories, it also includes one comic and several reviews of beloved literature and television programs that fit with the concept. All content was submitted by the writers (and illustrator) in hopes of being included in this publication.

Overall, Biketopia shines as a collection. While it’s clear that many writers in this book are novice, and several of the stories suffer from pacing issues, lack of character development, and finesse and style in their writing techniques, the stories themselves flow well from one to the other. With the exception of the included comic (a darling story by Maddy Spencer called “Meet Cute”), most of the stories in the book focus on a bleak and terrifying future. In times like these, it’s not difficult to understand why the authors would paint the future in such a way. For example, Jim Warrenfeltz’s story “Questions with the First” is written in a Q&A format, wherein a vain, insufferable leader of the future is being interviewed; one cannot help but draw parallels. To keep with the science fiction genre promised, the stories feature technology taking charge, zombies and disease outbreaks, Hunger Games-esque tournaments, and bicycles practically having a mind of their own.

Speaking of bicycles, every story does feature a character interacting with a bike in some way. More often than not, bicycles are used in these tales as a means to escape danger or merely as transportation; often feeling like the addition of a bicycle to the story is a bit of a throwaway. While both of these reasons to ride a bike are perfectly logical, in a book that markets itself as a science fiction collection one might hope for a bit more imagination to go in with the inclusion of the bikes. Luckily, some authors really do run with the bicycle theme. “Riding In Place” (Ulibarri) portrays a woman and an android slowly building a relationship as they ride stationary bikes side-by-side up on a space station, “Taming the Beast” (Bose) tells of a woman who must learn how to control her new bike which has a mind of its own, and “Maaike’s Aquatic Center for Bicycles Raised by Fishes” (Kwak) … well, that title really says it all, doesn’t it? Feminism, though not quite as stand out as the bicycles and science fiction, is also present in all of the stories. Readers are given defiant females, plus gender nonconforming and queer characters. “Shelter” (Marts) even provides a dystopian future that alludes to the world of The Handmaid’s Tale.

While perhaps not the strongest written collection of stories one might find, Biketopia is still a harrowing delight filled to the brim with feminism and bicycles. Surely this book belongs on the bookshelf of every Portlandian.