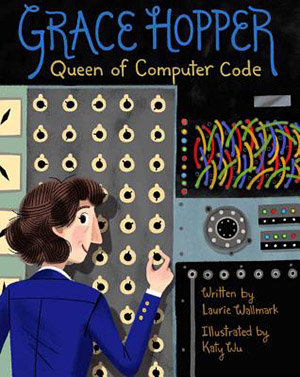 Grace Hopper was an early computer programmer – one of the earliest, back when code had to be written by hand on paper. She was a professor, a Navy engineer, and developed groundbreaking programming techniques that we take for granted today, such as the ability to store code on a machine, and the idea of using English words as directives in programs instead of just numbers.

The book is like an extended Google Doodle – the illustrations Google uses in place of a logo to call attention to a historical figure’s birthday or the anniversary of something. Not surprising, considering illustrator Katy Wu counts Google among her clients. The design of the book is beautiful, readable, with an appealing earthy color palette, characteristic art style, and fun hand-lettered features to illustrate Grace’s quotes. And like a Google Doodle, the book will educate you about an important person you may not have known about, impressing you with facts while also being a treat for your eyes.

There were some issues with Wallmark’s presentation of Grace, particularly the way the author puts down girls and young women who do typical “girly things” like wearing frilly clothes and wanting to get married, in order to contrast them with Grace and say that Grace is better for not doing those things. This was done at least twice in the book, and it isn’t necessary; a woman can be a wife and mother and also be a brilliant programmer, it just so happens that Grace was only the latter.

However, overlooking those unfortunate implications, the book is a fascinating character study of a great role model for girls. She is a scientist, but she is also artistic and creative (she draws in order to get her ideas flowing), and she has a sense of humor (coining the term “computer bug” when an actual insect got into a machine). Also important, there is a resource guide in the back, for more reading about women in the STEM fields, so that any future Graces can continue to be inspired.