In the Darkroom by Susan Faludi 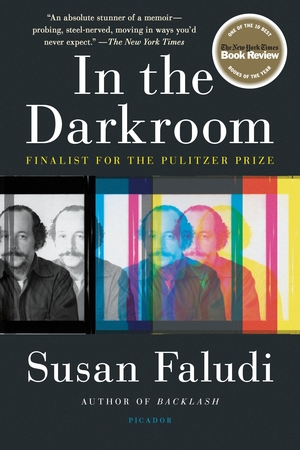 In July, 2004 Susan Faludi was the recipient of an e-mail from her father. Since her parents’ divorce in 1977 there had been only a few contacts of short duration between Susan and her father. The e-mail contained photographs labeled “Stefanie” who was in a blouse and red skirt, and was signed “love from your parent, Stefanie.” Thus, Susan began an 11-year voyage of discovery. As a child and teenager her father was “macho,” dominant, in charge, aggressive, and at times violent. There was little in those interactions allowing her to develop understanding let alone affection. With the new contact, she began a series of trips to visit and spend time with, interview, and learn about his father. Trips were also made to interview remaining family members – most unknown to Susan – individuals from childhood, and those who shared in “change.” This book is a memoir of her efforts to learn about her father, recollections of her life with him; a biography of her father and a history of the world Stefanie lived in during and after the “change,” and histories of the world he lived in as Steven and Istvan Friedman.

Extensive information about the history of Hungary, especially from the 1900s through the 2000s helps readers to understand Istvan/Steven. There is also information about the psychology and study of transitioning including specifics of medications and procedures. Susan presents this from her perspective as she is learning about all this, in a very sensitive, caring way. It is easy to read and understand as well as participate in her feelings as she discovers her family and father. Susan is always consistent in her writing while using pronouns; “he” and “him” for Istvan and Steven, while using “she” and “her” for Stefanie, which assists in following the story. While this reviewer is a retired physician and has an extensive vocabulary, it is clear there are many words (swivel, comestible, concupiscent, antipodal, midden, and others) which were unfortunately unknown to the reviewer and required maintaining a dictionary nearby. The book lacks an index which would have made it simpler to locate and reference people and histories. This is a very good book, one that is quite thought provoking.