Murder in Plain English: From Manifestos to Memes—Looking at Murder through the Words of Killers by Michael Arntfield and Marcel Danesi 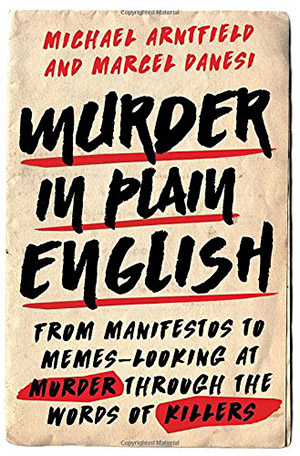 Murder captivates the imagination. What makes someone kill? Is it genetic? Are homicidal tendencies a result of a dysfunctional childhood or a manifestation of our narcissistic culture? Questions outnumber the answers, and there are many different methods of gaining insight into the driving factors behind murder.

In Murder in Plain English: From Manifestos to Memes – Looking at Murder through the Words of Killers, professors Michael Arntfield and Marcel Danesi take a more literary approach.

“Through fictional and semifictional tales alongside the actual words of murderers themselves, we will take a look at murder through two sets of eyes – those of the literary writer and those of the murder-as-writer.” (24)

The authors are a uniquely specialized duo for literary criminology. Arntfield is a professor at Western University where he specializes in digital and emerging media, investigative journalism, true crime writing, forensic linguistics, lexicology, and stylometry. He previously served as a professor of criminology at Wilfrid Laurier University, and is now affiliate faculty with the Centre for Research in Forensic Semiotics at Victoria College, University of Toronto. Furthermore, he has over 15 years’ experience as a police officer. Co-author Marcel Danesi is a linguistic anthropology, semiotics, and youth culture professor at the St. George Campus, University of Toronto.

Murder in Plain English touches on the philosophy of murder in some literature, primarily Crime and Punishment by Fyodor Dostoevsky, and how novels such as J.D. Salinger’s The Catcher in the Rye have allegedly inspired murders, but Arntfield and Danesi mainly focus on the killers’ own writings. They begin with the newspaper coverage of Jack the Ripper and recount the stories of dozens of different murderers as recent as Dylan Roof and Omar Mateen.

Arntfield and Danesi analyze the language from passages of quotes from the murders’ letters, testimonies, diaries, short stories, plays, social media, and manifestos. They examine the misspellings, the grammatical errors, and the Zodiac Killer’s cryptograms. With disdain and accuracy, they point out that the work is amateurish.

The hypothesis of the book comes toward the end because, as the authors explain, they wanted to construct Murder in Plain English like a murder mystery. For that reason, it does not seem fitting to divulge their central argument in a review, but it’s their answer to the following:

“The broader question is, why does the reading or writing of graphic texts lead some people to take the next step to act on their homicidal fantasies while in others it does not?” (210-211)

Murder in Plain English is ideal for any true crime aficionados who want to take a closer look at how language both influences and is used by murderers.