The Adventures of John Carson in Several Quarters of the World: A Novel of Robert Louis Stevenson, by Brian Doyle 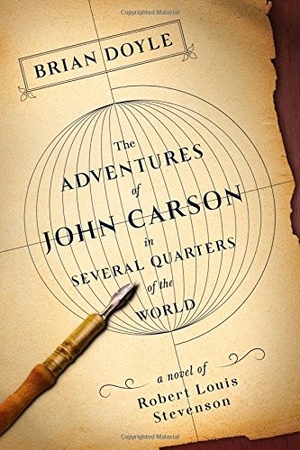 As soon as I began reading The Adventures of John Carson in Several Quarters of the World: A Novel of Robert Louis Stevenson by Brian Doyle, I was hooked. Right off, I found myself reminiscing about Stevenson’s many novels of adventure, especially Treasure Island (1883), Kidnapped (1886), and Strange Case of Dr. Jekyll and Mr. Hyde (1886). Stevenson’s popular books are among the most translated in the world. And now, here’s a novel about him as a writer.

Robert Louis Stevenson was born in Scotland in 1850, and died in Samoa in 1894 at age 44. Along the way he met an American divorcee named Frances (Fanny) Matilda Vandegrift Osbourne. In 1879 he arrived in San Francisco to court her and in 1880 they were married. The bulk of the story takes place during that period.

At some point, Stevenson apparently contemplated writing a novel about a traveler and storyteller named John Carson. Brian Doyle, speculates that Stevenson may have heard of Carson from somebody in San Francisco; but of a book, says Doyle, “no scrap or draft or sketch or notes has ever surfaced,” although “ever since I read about this unwritten book of Stevenson’s, many years ago, I have dreamed about writing it for him.”

Doyle, who is a well-known Oregon writer, has written the novel that Stevenson never got around to. The result is a book that is both a novel bit of biography and of historical fiction. You may quibble with the approach and with Doyle’s writerly audacity posing, in a way, as Stevenson’s stand-in, but it works for me. I had trouble putting the book down.

And who was Carson? Nobody knows for sure, so Doyle has invented him. Here’s an early account of him in San Francisco:

“Mr. Carson, using only his voice emerging from the darkness, had composed a whole and complete world, and populated it with people I could see and hear and touch, and had drawn me in with such skill and depth that I felt the oppressive tropical heat of Borneo, and the rough handling by Dayak guards, and the fearful tension of that shadowy chess match, on which hung the life of a terrified boy cowering in a hut; indeed I thought I could faintly smell the suit of fragrant flowers he had worn as he walked out of the forest. That such a level of tale-telling was possible!…”

The book has received laudatory reviews from many sources, including Jenny Davidson in the New York Times (on April 14, 2017) who calls Doyle’s book a “loving reconstruction of an era of storytelling now lost.”

BRIAN DOYLE (1956-2017) was the longtime editor of Portland Magazine at the University of Portland, in Oregon. He is the author of six collections of essays, two nonfiction books, two collections of “proems,” the short story collection Bin Laden’s Bald Spot, the novella Cat’s Foot, and the novels Mink River, The Plover, and Martin Marten. He is also the editor of several anthologies, including Ho`olaule`a, a collection of writing about the Pacific islands. Doyle’s books have seven times been finalists for the Oregon Book Award, and his essays have appeared in The Atlantic Monthly, Harper’s, Orion, The American Scholar, The Sun, The Georgia Review, and in newspapers and magazines around the world, including The New York Times, The Times of London, and The Age (in Australia). His essays have also been reprinted in the annual Best American Essays, Best American Science & Nature Writing, and Best American Spiritual Writing anthologies. Among various honors for his work is a Catholic Book Award, three Pushcart Prizes, the John Burroughs Award for Nature Essays, Foreword Reviews‘ Novel of the Year award in 2011, and the Award in Literature from the American Academy of Arts and Letters in 2008 (previous recipients include Saul Bellow, Kurt Vonnegut, Flannery O’Connor, and Mary Oliver).