The Anguana’s Tale by Tonya Macalino, Illustrated by Maya Lilova 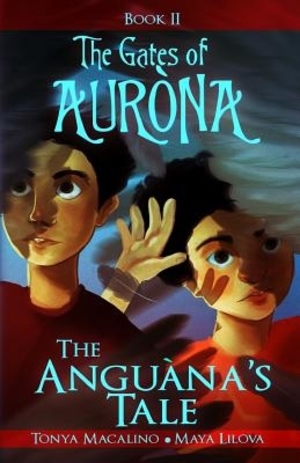 Last night, Hannah and Cameron discovered a family history of nobility and betrayal. They learned that magic exists. They faced an ancient enemy sorcerer and survived. Now, they have to figure out their place in a world that’s not as familiar as they thought, nor so comfortable. Nor as safe.

In The Anguàna’s Tale, the second book of the Gates of Auròna, the Troyer family returns to an unbalanced life. Hannah and Cameron’s mom refuses to let the recent supernatural events imprison them in their home, and tries her best to restore a feeling of normalcy with a trip to town. Soon, though, the wings block out the sun as a huge flock of turkey vultures fills the sky and the streets. They clearly want the Troyer’s attention… but why? And how far will they go to get it?

Tonya Macalino writes her characters with a realistic empathy that sometimes breaks the heart and always captivates. The fantastical elements pull the reader along, fascinating them with the Troyer mythology, but it is the simple family moments that make the reader care about the Troyers. Macalino’s use of Hillsboro historical details adds a nice surrealism to the work, creating a blend of fantasy and reality where gates to other worlds make sense. Improving on the first book, the Troyers also have more of an active role in The Anguàna’s Tale; and, fittingly, the stakes feel higher in the second book as well.

If there is one complaint to be made, it is that the solution for the conflict comes too easily – but the future looks ever more dangerous, and Hannah worries about where her future is headed.

“This doesn’t mean they’re going to force me to be a warrior, does it, Mom?”

So far, the Gates of Auròna series captivates easily and, judging by its second book, the series will only get better. With reader guides, learning guides, recipes, and more available, Macalino makes it easy for any reader to get lost in her world.