Under the Big Black Sun: A Personal History of L.A. Punk by John Doe and Tom DeSavia 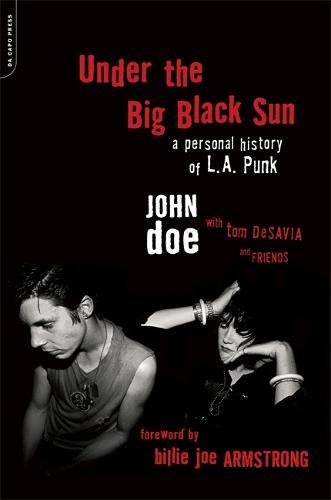 John Doe has put together a history of L.A.Punk Music in the 1970s. The contributors include his band-mate Exene Cervenka, Charlotte Caffey, and Jane Weidlin of the Au Go-Go’s, and a half dozen other musicians, music critics, and record producers. The book does a fine job of capturing the rebellious spirit of this group of anti-Top Forty radio commandos.

Riding the buses or commandeering their parents cars, these arts-oriented teenagers cut a wide path across the Los Angeles and Orange Country artistic wilderness. They lived in intentional squalor at such colorful residencies as the Canterbury where social and sexual barriers seemed to coalesce into a non-stop party. They nurtured their musical chops in small clubs in such unlikely areas as Chinatown, and the scene was nurtured by Slash Magazine and other fanzines like Bomp and Back Door, and by tiny record labels and slightly larger subsequent labels, like Slash. The book captures the way that bands promoted themselves long before social media and computers by cut and paste graphics posters and fan mags. A D.I.Y. ethic before that concept was ever formalized by internet savants.

As the tale unfolds, the initially innocent scene is impacted by the presence of hard drugs and the hardcore bands and audience that had little toleration for their more innocent forebears. As Dave Alvin explains the LA punk aesthetic, “most of the groups felt a sense of unity against the record labels that wouldn’t sign us, the radio stations that wouldn’t play us, the clubs wouldn’t book us, and the promoters that might rip us off.” Author Kristine McKenna captures the art-orientation of the original bands, the surprising parity between men and women, and the general acceptance of people of color as a welcome part for the scene.

Although books of essays that collect the thoughts of various authors are often uneven, somehow this one retains its coherence and sense of identity. Everyone who writes here was part of the scene in one way or another, not simply observers writing from a distance. The various authors describe a number of climactic moments when well-known figures became drugs casualties.

This book will appeal most to people who were either part of the scene, or who have a deep interest in the various bands and clubs. The more general reader may be a bit overwhelmed by the mentions of many obscure bands and little-known clubs. If you want to learn more about the LA punk scene of the 70s, this is a good place to turn. This reader would have welcomed some more information about how the scene reacted to the commercial success of the Au Go-Gos, and the way that X, for example, became respected and notable figures in a scene that essentially reacted negatively to that whole notion.