Drawdown: The Most Comprehensive Plan Ever Proposed to Reverse Global Warming edited by Paul Hawken 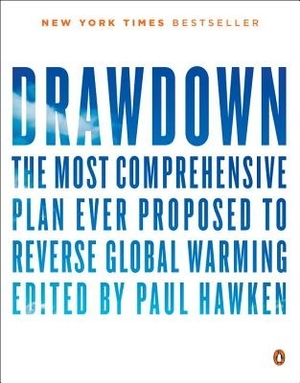 Drawdown is a wonderful, impressive book, both in form and content. It’s sized appropriately for a coffee table, features heavy, satin finished paper and is lavishly furnished with photographs. While that’s very nice, the content is where it shines brightest.

The main body of the book is divided into eight discrete sections and among them, put forward one hundred ways to not only minimize the production of carbon dioxide but, as the book’s name states, remove carbon dioxide from the atmosphere and, maybe reduce the degree of global warming in our future.

For starters, I urge you to read all of the introductory material before you move on to the ‘sexy’ part. It lays out the problems, as the Drawdown fellows perceive them, and explains the methodology and goals in a clear, thoughtful, and forward-looking manner.

Each of the one hundred methods is ranked as to the degree of effectiveness. The chapters, about two pages each, are grouped according to their similarity and run the gamut of high technology, solar and wind as you might expect, and include farming methods that put carbon dioxide back into the ground while increasing yields and returning the soil to health. It’s surprising and, to me, amazing what can be done by rediscovering the ways plants and animals, just living together, interacted to protect the Earth from lasting damage over millennia. In many places, mankind has disrupted those systems. Drawdown shows how that can be reversed and has been, in some places.

Of course, there are still some who dismiss the whole idea of climate change as a plot to disadvantage the United States, provide income for grasping researchers, or any number of reasons to do nothing.

Even if those ideas are partly right, there are enough problems such as salinization of farmland due to heavy irrigation, waterway pollution due to over-dependence on nitrogen compound fertilizers resulting in soil degradation and, finally, in ocean dead zones. These universally recognized problems, that seem to have been viewed as not solvable, do have solutions given in these pages so that, while solving one problem, work to solve the larger one as well.

Drawdown presents the best traditions of science and academics to enlighten, encourage, and invite informed participation in the larger work.

To understand each of our places in the great scheme of things, I’m including an entire paragraph by the editor, Paul Hawken:

“However, placing too high an emphasis on the individual can lead to people feeling so personally responsible that they become overwhelmed by the enormity of the task at hand. Norwegian psychologist and economist Per Espen Stokes has described how individuals respond to being besieged with science that describes climate change in the language of threat and doom. Fear arises and becomes intertwined with guilt, resulting in passivity, apathy and denial. To be effective, we require and deserve a conversation that includes possibility and opportunity, not repetitive emphasis on our undoing.”

Drawdown provides that. I can’t recommend this book highly enough.