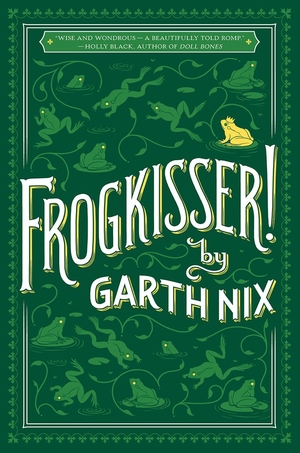 Garth Nix’s Frogkisser combines fairytale, fantasy, adventure, a quest, and humor as Princess Anya must stop her evil stepfather, Duke Rikard, in a tale that involves flying carpets, good wizards, druids, responsible robbers, a frog prince, and other transformed creatures. Anya’s stepfather is a sorcerer, one that uses evil magic too much that it causes his humanity to decay. Her stepfather wants to ship her off to a school halfway around the world to get rid of her while he takes over the kingdom of Trallonia. Instead of obeying her stepfather’s orders, the royal dogs insist she goes on a quest. While on the quest, she must get the ingredients for a magical and mostly reliable lip balm that she needs to help her transform a frog back into a prince. As a princess, she has the ability to break transformation curses with a kiss. Along the way she meets others, including a ten-year-old thief that has been transformed into a newt. Not only must Anya save her new friends, she must find the courage and leadership needed to save her kingdom.

This story is told through third person point of view where Princess Anya’s story is showcased. Anya is a well-developed character. She is not the type that relies on someone to save her and is compassionate towards helping others. She has educated herself in sorcery and even had planned on becoming a sorcerer. However, as she develops, she realizes her true purpose in her kingdom and her affinity for wizardry. The unlikely friendship between Shrub, the thief turned newt, Ardent, a royal dog that assists her, and Smoothie, an otter, is a great addition to the humorous, adventurous tale as they work with Anya to continue on their quest and face obstacles together. Each character experiences development through the story and their personalities differ but still complement the novel.

Additionally, the world building and types of creatures adds to the imaginative tale. The descriptions were vivid and showcased the various kingdoms they traveled. Humorous titles such as Duke Rikard’s League of Right-Minded Sorcerers or the Association of Responsible Robbers and the twist on Anya having two step parents gives a fresh take on the fairytale genre.

Identity and loyalty are also key components of the story, where friendship and trust is founded on this loyalty. Anya showcases her leadership skills, while allowing others to take on some of the responsibilities, being very humble in her knowledge. This is unlike her relationship with Duke Rikard where there is only distrust. Identity is an important part, because not only does this story serve as a coming-of-age novel where Anya discovers more aspects of her personality, identity is important in transformation. The friends learn that it does not matter what form they are in, because what is most important is who you are.

Frogkisser is recommended for people who enjoy adventures, fantasy, magic, and humor embedded in a unique twist on the fairytale genre that creates an imaginative reading experience.