History of a Disappearance: The Story of a Forgotten Polish Town by Filip Springer 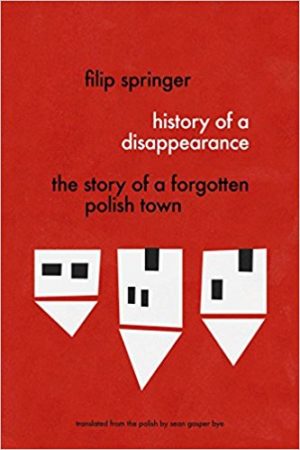 What a fascinating read! – the history of a small town in Silesia, once German, now Polish, which began simply back in the 14th century, slowly grew, prospered, then faded, collapsed and disappeared off the map. Even when it was flourishing, it wasn’t on many maps, nor on well-trod paths or roads to anywhere else.

Filip Springer, a freelance journalist with a good eye and ear for history, has pieced together the story of Kupferberg (German), more recently known as Miedzianka (Polish), from personal accounts and chronicles. His style of descriptive historical reckoning gives us an absorbing picture of a little known place, once home to so many families, each with their personal accounts and their contrasting ethnic allegiances.

Springer writes, “History never well and truly arrived here, but instead roamed around in the vicinity… it seemed a beast that knew only how to sow chaos and destruction.”

The story of Miedzianka charmed the author, including all that “chaos and destruction,” then abandoned, forgotten, disappeared. Its families came and went through economic boom and bane, and the traumas of war; Hitler Youth gathered here in the 1930s; Stalin’s Red Army swept through in the ‘40s. One of the best things that came was the brewery, which thrived in good times and bad, employed many villagers, and lasted a good long time.

At the height of its clouded lifetime, Miedzianka was a mining town. But years after the underground uranium mines were closed and collapsed, the town itself began to collapse as houses and stores fell deep into the yawning sinkholes. “At night, some buildings let out hair-raising noises, they crack, creak and groan… [and] have started to sing.” Once it was a town rich and resplendent with charming memories, shattered now by its demise.

In July 1999 someone erected a memorial plaque in the town’s old cemetery. “Rest in Peace. You are not forgotten,” it reads in both German and Polish. Around the cemetery, “Dozens of buildings, a mansion, old Glyschinsiky’s water-bottling plant, the church with the yellow façade – it’s all vanished, destroyed, plundered, razed to the ground, trucked off, plowed under, collapsed into the ground.”