My Sister, My Daughter, and Me, by Shirley Rose Webb 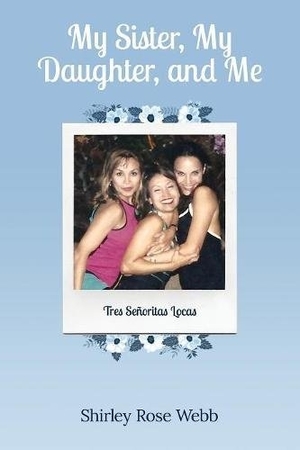 It can’t be said that Shirley Rose Webb has had an uneventful life. She was born in Costa Rica, her parents sought work in the U.S. when she was six, she and her six siblings lived on her grandmother’s farm, she watched cows give birth, got a bone infection in her leg and nearly had to have it amputated, watched her hospital roommate die, moved to America, started working as a seamstress with her mother, narrowly escaped being molested by a friend of her father’s, married at 17 years of age, had two children, left her drug-using husband when he suggested selling the children, and trained to become a medical assistant. And that’s just the first 20 pages.

The main thrust of the story is her relationship with her favorite sister, Lina, who is a beautiful, fun-loving party girl and a Playboy model. She and Lina work for an ad agency in West Los Angeles, meet celebrities, party, try new things, and have fun together. In the early years, Shirley’s children are secondary to the story, but they start appearing more in her anecdotes after they are grown, especially her daughter, Natalie – she and Lina happen to marry a pair of brothers, and they start their own families in a small Mississippi town. But amid the fun and laughter, tragedy strikes, and Shirley must care for her family and make huge sacrifices to support them.

It’s difficult to critique a book like this one, which is so personal, and so much of the writer’s heart and thoughts are spilled out onto the page. However, this book could have benefitted from some judicious editing, and cuts could have been made. The middle section, covering Shirley’s 20s and early 30s, with all its celebrity encounters and girls’ nights out, got repetitive and slowed the book down. Once Shirley’s daughter Natalie was older and became a more major player in the story, the pace picked up and became more interesting – focusing on the whole family and the larger picture. Webb succeeded more at writing the tragic portions of her story than the comedic portions, and the second half of the book, where things started to go wrong, was more interesting and written with more emotional depth than the first half.

There are some real gems in this story, and some lovely moments that Webb describes: bottle feeding a baby calf as a child, the way she and her sister initially called her husband-to-be Torreey “Tweety Bird” because they couldn’t remember his name when Shirley first met him, the descriptions of the idyllic holidays to visit Natalie at her house on the lake in Mississippi, and Shirley and Lina’s vacation antics with their other sisters (although I hope sister Gia is okay with some of the embarrassing stories printed about her here!). The way Shirley writes about Lina’s battle with cancer is heartbreaking and relatable, and full of the little details that you will recognize if you’ve ever been in her position.

But what is needed with this book is a gentle but firm editor, to whittle the book down to its essence, cut out the unnecessary, clarify the timeline so it doesn’t jump back and forth, and deal with some of the careless mistakes left in the text, and some of the distracting idiosyncrasies of Webb’s writing.

Cheryl Strayed, in her book Tiny Beautiful Things, describes a memoir-writing class she teaches, and how she asks her students about every anecdote they commit to paper, what happened in this story? and what is this story about? Strayed says, “A lot of times, it isn’t much. Or rather, it’s a bunch of what happened that ends up being about nothing at all.” Webb’s memoir could benefit from honestly answering those questions. No doubt a lot has happened to her in her life, and a lot of it was very important and meaningful to her. There are many pearls of truth and beauty throughout the text, but they need to be placed in their proper settings, so to speak, in order to shine.