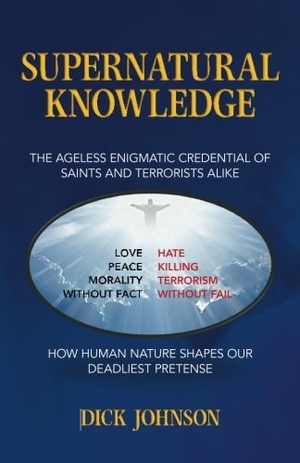 With Supernatural Knowledge: The Ageless Enigmatic Credential of Saints and Terrorists Alike, How Human Nature Shapes Our Deadliest Pretense, Mr. Johnson has embarked on an ambitious expedition over much trodden territory, but he brings a fresh style that might appeal to those who don’t want, or need, the whole university experience. The subject is no less than truth; what it is and how we discover it. Such a large and complicated subject that it will never be exhausted.

To begin with Mr. Johnson holds that our actions are a result of the process of our apprehension of some stimulus, our reaction to that stimulus, and finally, incorporating the experience into our store of experiences to understand, or justify our reactions. This process is a product of our evolutionary development and is, therefore, embedded in our genes. The second part of this is that only stimuli from the natural world can start the process. Imaginary constructs, such as unicorns, fairies, or gods need not, do not, and cannot apply.

Also, all of our reactions are tailored to do one thing: to enhance our well-being, from escaping the lion to gaining social acceptance. Kind of like Abraham Maslow’ hierarchy of human needs. This is a stark treatment of human behavior, but he makes a pretty good case, which this reviewer will accept as an idea worth exploring. As an overarching theory, it has implications for everything from child rearing to tax policy and they are examined in the book, as a function of said theory.

The exposition and expansion of this idea takes up most of the first part of the book. In the middle and later chapters, he becomes more and more explicit in his rejection of imaginary ideas that, since they don’t exist in the actual world and are not repeatable, can’t be tested, so they don’t provide stimulus that’s useful for aiding our quest for acceptance.

The second theme of the book becomes more explicitly anti-religious. Not by saying that this, and this, is wrong, but expanding on the notion that since religion is, as Jesus said “not of this world,” (John 18:36) We can’t apprehend, react, and incorporate any actual stimuli, so imagination takes over. So why religion? According to the author, since edifying stimuli is not always forthcoming, we will sometimes invent reasons to be acceptable to ourselves and others, a workaround that is seemingly, but not genuinely, helpful.

If you have trouble swallowing this idea, Mr. Johnson has laced his narrative with quotes from acknowledged wise men throughout history. For example, “It ain’t what you don’t know that gets you into trouble, it’s what you know for sure that just ain’t so” – Mark Twain.

Along with the author’s narrative, they add substance and support for his skeptical view of the supernatural, particularly as portrayed by the world’s religions.

Dick Johnson has, through the process of self-publishing, produced a readable work, complete with footnotes and, as an added bonus, a list of the quotes used throughout the book in one place. Though not perfect, it’s worth a look.