Pathfinder Tales: Through the Gate in the Sea by Howard Andrew Jones 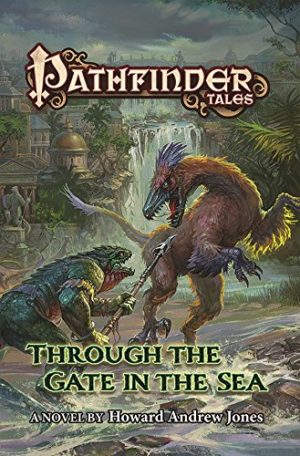 At the bottom of the sea, a salvaging crew accidentally discovers an ancient shipwreck from a lost civilization. The ship, though thousands of years old, looks untouched by time and contains magical wonders the crew has never before seen. The puzzle of the ship only marks the beginning of a deeper mystery, as the salvagers begin a hunt through legends for a surviving fragment of the advanced civilization – a city hidden beyond a gate in the sea.

Through the Gate in the Sea, written by Howard Andrew Jones, is the second book in the Pathfinder Tales series to feature Mirian Raas, a salvager and explorer who captains a ship in a land of pirates, jungles, and deadly monsters. The narrative has all the hallmarks of a great archaeological caper: eerie tombs, strange foreign lands, and a race for treasure. What stands out in Jones’ writing, though, is his thoughtful empathy. In a country built on imperial domination, tensions run high between the second-class natives and the ruling descendants of the former imperial occupiers. Raas, a half-native, walks between the roles of outcast and the privileged. Ivrian, who’s gay, thankfully has more to his personality than just his sexuality. Raas’ blood brother, the lizardman Jekka, survives as one of the last of his culture, and serves as a dark predictive mirror for the actions of the humans; having once dominated and abused the human race, the lizardmen created their own downfall. Jones takes a hard look at racism, entitlement, and the responsibility of those with power, as well as what actions are permissible when fighting for freedom. He doesn’t give any easy answers, but does clearly criticize some ways of thinking in ways which should be well received in today’s society.

The characters continue to develop in interesting ways, and hopefully Jones has many more adventures for them. For those looking for an easy fantasy adventure written with intelligence and soul, Through the Gate in the Sea is definitely a good choice.