The Explorers: The Door in the Alley by Adrienne Kress 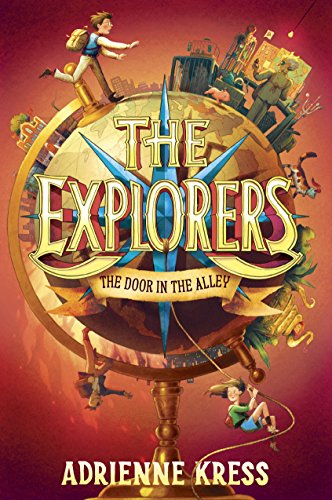 Adrienne Kress’ middle grade adventure novel, The Explorers: The Door in the Alley, is a whimsical story full of humor, suspense and mysterious intrigue. This story follows Sebastian, a logic-driven student, and Evie, an orphan who now boards at the school she attends after her parents death. The two meet unexpectedly at the Explorers Society where Sebastian has been working after school. He found old archives of the Filipendulous Five, an explorer group that the society wants to be forgotten. Evie was driven to the Explorers Society after she received a letter from the Andersons. Normally a boring couple, after a night of being held hostage by men looking for a key, they gave Evie a letter stating that her grandfather is alive but in danger. Evie wishes to find her grandfather and help protect the key. The problem is that she doesn’t know where the key or her grandfather are. All she has is a riddle from the letter and instructions from Mrs. Anderson to go to The Explorers Society. Evie and Sebastian strike up an unlikely friendship that leads them on an adventure to find her grandfather and the key before others have the chance to unlock the mysteries that it holds.

This story is told in third person point of view with varying chapters focused through Sebastian or Evie’s narrative. In Sebastian’s chapters, there is the occasional interjection of footnotes where his sarcastic humor leaks through. Evie and Sebastian’s personalities complement each other. Sebastian’s academic intelligence and logical way of thinking as well as Evie’s determination and bravery add to this adventurous tale. Sebastian develops from someone who rigidly follows logic and science to someone who allows room for the illogical, while Evie becomes less pessimistic about adventures and starts planning her own. The character development is well thought out and allows each character to evolve.

The first chapter will capture readers with its unusual, whimsical narrative, featuring a narrator explaining Sebastian’s run in with a man from The Explorers Society and a pig that wears hats. The development of the Explorers Society is intriguing, with visual imagery that entices the reader to discover more of the many rooms in the society and learn about its interesting members. From the rooftop terrace resting among branches of a tree, to the library with skeletons of dinosaurs and the engineering level that holds a replica of the Wright Brothers’ airplane, each room of the society leads to a new discovery, as well as the adventures of the Filipendulous Five.

The major themes are family and friendship. Evie works towards finding her surviving family member, and Sebastian works with her to solve each twist their adventure takes them on. While in some instances Sebastian must go against his logical judgment, he is able to help his friend. This fast-paced book will leave readers wanting more, especially with its cliffhanger ending.

The Explorers: The Door in the Alley is an intriguing beginning to a new middle grade series where humor, adventure, a mysterious society, a key and forgotten explorers are combined with enjoyable protagonists for an entertaining read.