Fall is for School by Robert Neubecker 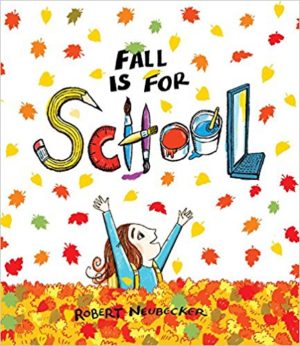 It’s fall! The leaves are turning, the weather is getting colder…and it’s time to go back to school. One boy is not happy about it, but his little sister loves school and tries to convince him that it’s not that bad. The boy doesn’t like math, just wants to play and draw, but the sister tells him that there’s more to school than math. While they walk to school, she paints a vivid picture of all the cool things they will learn about, and eventually her brother comes around.

Neubecker has a unique art style, obviously influenced from his experience as an editorial illustrator. The illustrations are imaginative, expressive, very humorous, and clever with color. As the sister talks about all the things she wants to learn and do, thought bubbles grow across the page, colorfully depicting dinosaurs, historical figures, the stars, kids playing sports, and more, and they eventually step out of the thought bubbles and onto the street. The reactions of the background passerby to the sister’s fits of imagination are some of the funniest parts – that, and when the girl tells her brother to stop whining, and he deadpans, “Whine.”

There are certainly many kids who relate to what the brother is saying in this book, and dread the coming of fall and school, fearing it will be a boring time of being chained to a desk. This book could be a helpful coping tool for those kids, with its ode to different learning styles, presented in an exciting and humorous way.