It Happens in the Hamptons by Holly Peterson 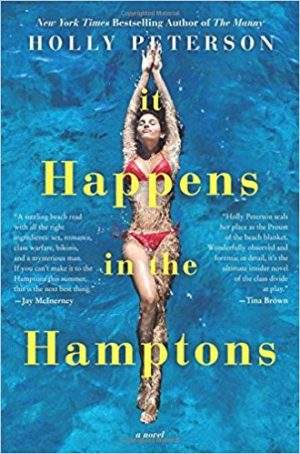 Katie Doyle relocates across the country to seek a new job, new friends, and possibly a new love relationship with George, a handsome gentleman she met at a conference in Portland, Oregon. George introduces Katie to people and life at the haughty country club at his home in the Hamptons. Seeing and learning about this lifestyle from individuals who have lived here for generations gives Katie an idea of what her life could become with George. Wealthy, ambitious people appear in her life in this hectic summer retreat. Katie finds herself attracted to a handsome marine biologist who runs the summer camp that her son attends. Clashes begin midway through the summer between the country club crowd and the summer camp and Katie learns things about George that lead to scandal in the Hamptons! The more she learns, the less she likes. Katie now wonders if this move to the Hamptons was a good idea after all.

It Happens in the Hamptons, by Holly Peterson, is brimming with sexual scandals, affairs, haughty individuals, and plenty of drama in a beautiful setting where everything is ready to collide at any moment! There were many twists and turns in the story that will kept the reader interested right up to the end. This is a book that leans more towards the romance reader crowd than those reading general fiction. Much of the focus is on the people living in the Hamptons, so those who enjoy people watching may get a bit extra out of the story. It Happens in the Hamptons is a quick, easy, and sexy summertime read.