Miranda and Caliban by Jacqueline Carey 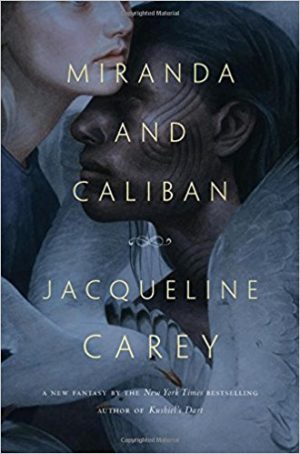 This is the story of Shakespeare’s The Tempest, but a prequel of sorts, focusing on the duke’s daughter Miranda growing up on the island. It’s an unusual childhood: they live in the ruins of a Moorish palace, they have elemental spirits as household servants, and most interestingly to Miranda, there is a feral child wandering the island, a boy only a few years older than her. This is Caliban, whom Prospero captures, binds with magic, and uses to further his plot. Miranda teaches Caliban language and “civilizes” him, while Prospero works his ever-mysterious magic. But Prospero can be a cruel master in hyper-focus of his revenge plan, and Miranda and Caliban are just cogs in his machine, kept in line with magical punishments.

Carey’s typical lacy prose throughout the book is a joy to read, although the six-year-old Miranda chapters sound just a touch too grown-up, but maybe that’s just what happens when you grow up on an island with only your much older father for company. The sights and smells of the island are richly described, and there are period-appropriate details (clothing, technology) that ground the story in the past and give it an accurate feel. The dialogue gets a little overly Shakespeare-y, especially the spirit Ariel’s, which can make it hard to read. But the chapters told from Caliban’s point of view, starting out in very simple, short sentences, then evolving as he learns more language, are masterful.

This is a tense, heartbreaking read for those who know the play. From The Tempest – which is not required reading before opening this book – you know that Miranda falls in love with and marries someone else, and leaves the island. Even as you witness Miranda and Caliban’s friendship and love develop, it’s tempered with the bitterness of the knowledge that the events of the play will wreak havoc on their relationship.

Perhaps it is this feeling of inevitability that makes Miranda and Caliban seem passive – obviously, Carey couldn’t have them do anything that would affect the outcome of The Tempest itself, so they don’t stand up to Prospero, even at his cruelest, even when the reader is mentally urging them to do so. And Prospero is quite a sinister character in this version of the story, and does some unforgivable things, but he is, at least in some small part, motivated by his love for Miranda, his feeling of having failed her, and his desire to give her the life she was born into.

It is this tension that is at the heart of Miranda and Caliban: the charming details of the life on the island that Miranda obviously enjoys, her innocent (until it isn’t) rapport with Caliban, versus her father’s machinations, and the ending that the reader knows is coming. When you read this book, you will wish things could turn out differently, while knowing they won’t, and although you know what’s coming, it will still hurt.