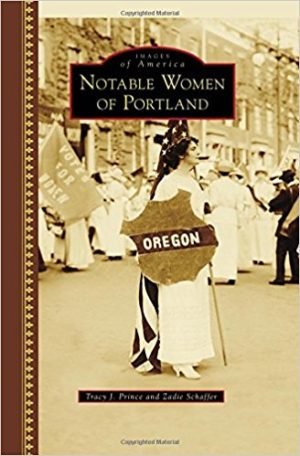 Who was the first Chinese-American woman to fly for the American military? Where did the Portland street names Terwilliger and Lovejoy originate? When did Oregon women gain the right to vote?

These answers and more were uncovered by Portland State University Professor Tracy J. Prince and researcher Zadie Schaffer. Notable Women of Portland is a beautifully bound hardback that spans from pre-1851 to the present on how historical women have shaped the city.

“The story of Portland, Oregon, like much of history, is usually told with a focus on men’s stories. This book tells about some of the women who made Portland what it is today.”

In addition to bringing women’s contributions to the forefront, Prince and Schaffer have made a conscious effort to select a diverse range of women from different cultural heritages, ethnicities, and social classes.

“Historians also depict post-1840s Portland as being devoid of Native Americans. This is incorrect. This book works to more accurately tell the history of early Portland’s Native American women.”

The authors cover the suffrage movement, Oregon’s 1849 black exclusion law, the Chinese Exclusion Act, civil rights, and women’s roles before, during, and after the two World Wars. There are chapters on female artists and politicians. Each page includes between one to three black and white photos plus paragraph-length captions. They aren’t able to include every notable Portland woman, but they attempted a comprehensive collection of primarily historical figures.

It’s clear by the visually appealing layout and the breadth that Prince and Schaffer have done substantial research, and the result is a wonderful compendium for anyone interested in the history of women’s contributions to Portland.