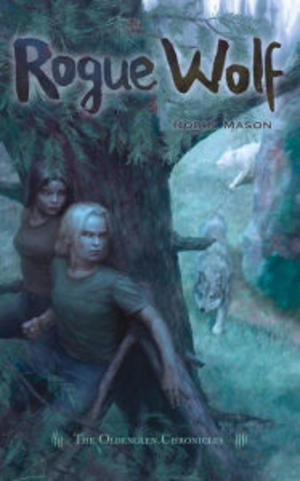 Jax Wolfe is looking forward to spring break and a visit from his best friend, Sarah Lopez. All he wants to do is spend time in Oldenglen, having fun with Sarah and the animals of the glen. Unfortunately, things are rarely calm in Oldenglen and this spring break is no exception. A new wolfpack has moved to the glen, threatening not only the deer and elk, but all the local wildlife. When diplomacy and reason do not work to encourage the pack’s leader, Rogue, to find a home elsewhere, Jax and the other animals need to think of a way to get the pack to move before they destroy it all. Complicating matters is the new pack’s dangerous behavior – they are hunting not only wild game but livestock from local farms. This brings attention from humans and danger to the glen. Jax, Sarah, and the animals of Oldenglen must work fast to outsmart the humans and the wolf pack to save their beloved home.

Rogue Wolf, by Robin Mason, is the third installment of The Oldenglen Chronicles and it is the best of the series so far. The writing is much more focused and descriptive. It engages the reader in a more nuanced way and keeps them engaged throughout the whole book. The plot is tight and has a nice pace throughout. The character development has been good throughout the books and both Jax and Sarah feel like fully realized characters. Jax’s inner wolf continues to grow and develop, which sets up some nice potential conflicts in the future; it frequently is at odds with his human instincts and it’s always interesting to see how he works to balance his two halves. The characters of the Oldenglen animals are always a delight and all have their individual personalities – some dangerous and some hilarious. The overall plot of the novel has much more at stake for the characters as well. Jax has to answer questions about whether he will choose the side of his wolfkin or of the glen animals in the conflict between the pack. The animals of Oldenglen also have to face bigger threats than before – not only with the rogue pack but with the addition of human hunters. This makes the dangers more personal and more interesting for all the characters in the book. With Rogue Wolf, Robin Mason appears to have hit his stride with this series. Older children and tweens will love this book.