Standby for Broadcast by Kari Rhyan 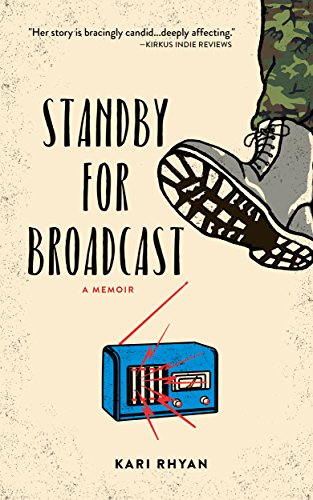 Like any good story, most memoirs have at their core an event or a thematically related series of events. Generally, traumatic ones. Kari Rhyan’s debut memoir Standby for Broadcast provides this to an extreme. Her experiences as a combat nurse in Afghanistan entwine themselves with her childhood experiences of neglect and abuse. She writes her incredible story with intensity and wit. Every character, whether individually real or a composite, adds to the depth and breadth of the story. As do her personified character traits that help her cope in the war zones, in her return stateside, and as she faces the hard work of bringing it all together.

Rhyan’s memoir begins the day her shrink, Johnnie Walker, informs her there will be no more drugs for her and that she (Dr. Walker) is sending her to a civilian hospital. The narrative alludes to a potentially violent incident that occurred at home the previous night. The description of the worry and stress clearly show how difficult it is for Rhyan to maintain her composure and calm.

Although much of the story takes place while Rhyan is a patient in the hospital, her program of healing and recovery demands that she explore her complex issues. As she does the required writing of her timeline and in her combat journal, her story shines a light on her resistance, including the hidden family issues.

Standby for Broadcast is a story filled with the angst and insight that can only be provided by someone who has been present to the travesty and camaraderie of a war zone. Kari Rhyan tells her story in a way that draws in and enlightens the reader without overwhelming. She has a unique capacity to share her stories in a manner that opens a door on a world many people never experience. Standby for Broadcast is an absorbing story for anyone interested in the complexity of living in and through a war zone as well as surviving the return from it.