The Ambulance Drivers: Hemingway, Dos Passos, and a Friendship Made and Lost in War by James McGrath Morris 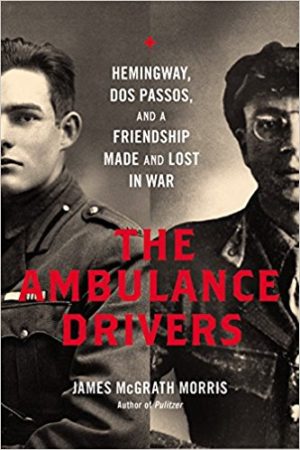 At present, the most notable members of the “Lost Generation,” a group of American writers reflecting on their experiences during and after the Great War, are Ernest Hemingway, F. Scott Fitzgerald, and Gertrude Stein. A significant member of the Lost Generation, Dos Passos, is often overlooked and forgotten by history. Like Hemingway, Dos Passos drove an ambulance in World War I and later traveled the world, writing about his experiences during and after the war, as an expatriate. Both Hemingway and Dos Passos sought to fictionalize the war and the subsequent relationships and experiences they’d accumulated. However, while Hemingway’s dry, direct style sensationalized events, Dos Passos’s writing examined the moral implications and horrors of the war. These differences and the strain of time and success or lack of would eventually lead to the dissolution of their friendship.

Morris alternates between Hemingway and Dos Passos, eventually interweaving their stories as their lives converge. Early chapters are compelling and insightful in that they foreshadow the type of authors Dos Passos and Hemingway will become. Later chapters reveal the extent to which the two authors’ lives overlapped. For instance, Hemingway was inspired to move to Key West after first hearing about it from Dos Passos. Morris’s extensive research on his two subjects is evident in the ease he progresses through the author’s lives. He allocates the ideal amount of time on each period of their lives. While it’s easy for some biographies to be bogged down in details and facts, The Ambulance Drivers is a fluid, engrossing read. Additionally, there are extensive resources at the end of the book if readers wish to expand upon their knowledge of one or both authors.