The Leavers by Lisa Ko 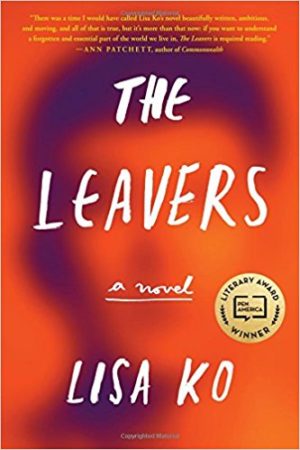 When Lisa Ko’s debut novel The Leavers opens, we’re introduced to Deming Guo, a young Chinese immigrant (technically born in the U.S. but raised for a handful of years by his grandfather in rural China) living in New York City with his mother, Polly. They live with Polly’s boyfriend, his sister, and his nephew in a one-bedroom apartment. The adults work long hours to put food on the table and raise their children in a mixed culture, at once very Chinese and American. One day, Polly leaves for her job at a nail salon and doesn’t return home, leaving her son with people who haven’t the resources to raise him. Adopted by the Wilkersons, upper-middle class white college professors who live upstate, Deming is renamed Daniel and thrown into a culture which, to him, is completely foreign – and is expected to conform and thrive.

Cut ahead a few years. Now in his early twenties and seemingly focused on self-destruction, Deming is facing down a developing alcohol problem and gambling addiction. He’s isolating friends from his youth and disappointing his adoptive parents. After burning every bridge there is to burn, Deming runs into Michael, the nephew of his mother’s former boyfriend, and begins a journey to find out the truth of what happened the fateful day his mother left.

The Leavers is really two novels: Deming’s story and that of his mother. While his chapters are told in third person, hers are in first; we gain a sense of intimacy with this imperfect woman, bogged down by a variety of things – her desire to live in the city, an unplanned pregnancy, outstanding debts for her trip to America, her immigration status. The characters in The Leavers are all fantastically flawed human beings. At points, nearly all of them make cringe-worthy decisions and risk becoming unlikable. It is a true testament to Ko’s talent as an author that Deming, Polly, and the rest of her cast end up being shown in such a sympathetic and relatable light. The characters who don’t fare so well in the compassion arena are Deming/Daniel’s well-meaning but borderline stereotypically white adoptive parents, Kay and Peter, who seem to assume that their attempts at cultural sensitivity make them superior judges. There is a scene in which they take the newly adopted Deming out for Chinese food with some friends, a white couple with an adopted Chinese daughter; the discussion of the food’s authenticity and quality, which Deming knows is subpar, is painful to read. Whether or not this commentary was intentional on Ko’s part is a question I cannot answer, but it, like so much of the book, rang so true and cut so deep and decisively to the core of this beautiful, brilliant novel’s message that it begs us ask questions about our own assumptions of culture and community and what truly makes for a good childhood.

Perhaps most powerful, however, is the way in which Ko is able to give us a peek into the world of the undocumented immigrant, from day-to-day anxiety and hardship to deplorable conditions in detention centers to the ludicrous practice of separating American-born children from their parents without compunction. As clichéd as it is to say, there is something incredibly timely about this book, and something invaluable in Ko’s ability to fully humanize people who are far too often relegated to the position of symbols and far too rarely seen as fully realized beings. The Leavers is more than just a gorgeously written and perfectly constructed novel; it’s a book that means something – maybe even more than its author intended.