The Push by Tommy Caldwell 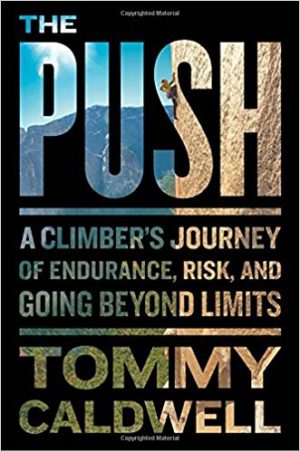 After finishing The Push by world class rock climber Tommy Caldwell, this reviewer was unsure of what to feel. The book is not your typical athlete biography because it explores much more than past heroic athletic accomplishments and accolades. The Push manages to take you on a journey that is many things – remarkable, inspiring, horrific, earnest, and maybe, most importantly, honest.

The Push not only tells the story of Caldwell and his world-class climbing achievements and capability, it also tells, in great honesty and reflection, of his relationship with his parents (particularly his supportive father who introduced Caldwell to the mountains) and his horrific climbing experience in Krygyzstan (where Caldwell and his climbing group were kidnapped for 6 days). The story also tells of his romance, marriage, and divorce to Beth Rodden (another world class climber), to finding love again with his now wife Becca, to the spectacle of fatherhood.

While Caldwell takes the reader on a climbing adventure, he tells the reader where he’s been, the rock walls and mountains he’s climbed and the physical and mental effort that it took to get him to where he is today. Caldwell speaks to these events with such honesty and candor that you can’t help but feel what he felt. He has put his thoughts and emotions into words with such clarity that it catches the reader off guard. Caldwell is no ordinary athlete as he displays his skill in writing as thoughtful, empathetic, and extremely self-aware. At the age of thirty-eight, he’s already lived a lifetime and The Push is a fabulous documentation of his life lived thus far.