The Wisdom of the Middle Ages by Michael K. Kellogg 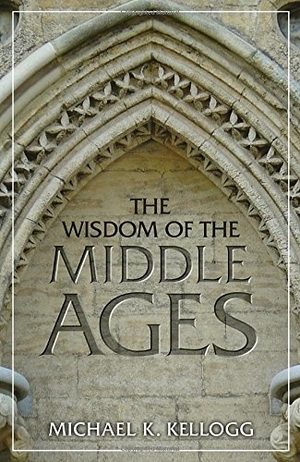 Light glimmers in the shadows. The New Testament, Augustine, Boethius, Beowulf, The Letters of Abelard and Heloise, The Song of Roland, epic adventures of knights written by Chrétien de Troyes, Saint Francis of Assisi, Saint Thomas Aquinas, Dante’s Divine Comedy, Giovanni Boccaccio’s Decameron, and Geoffrey Chaucer’s The Canterbury Tales—these are the literature, art, and philosophy treasures of the so-called Dark Ages. Despite the collapse of the political turmoil, poverty, frequent wars, high rate of illiteracy, plagues, and other miseries, these letters, poems, and works shine with intellect, intuition, and insight.

“Classical thought did not disappear to be rediscovered in the Renaissance; it was deeply embedded in Christianity the entire time” (65).

Michael K. Kellogg, who was educated at Stanford and Oxford in philosophy, writes engaging introductions in The Wisdom of the Middle Ages for each of the aforementioned writings. He gives a brief but thorough biography of each of the writers and highlights from their masterpieces. For people who haven’t read these classics, The Wisdom of the Middle Ages provides a great overview. For those who have read them, Kellogg provides some analysis and helps put them in context to the works that preceded and succeeded. This is particularly useful for some of the drier, denser texts. Ultimately, this is an enjoyable book for anyone who loves philosophy, literature, and the Middle Ages.