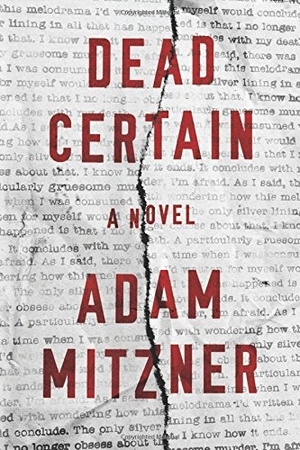 After having worked at her father’s well-known law practice for three months following a stint in the New York District Attorney’s Office, Ellen receives a text from her younger sister, Charlotte, to meet at a local diner for the “news.” Charlotte reveals that her half-written book has been accepted for publication as her first novel. As Charlotte had in the past used thinly fictionalized activities of her life and those of family and friends, Ellen is suspicious that her life may be part of the novel. The sisters are very close, calling and texting on a daily basis. After a two-day period of not hearing from Charlotte, Ellen believes something is wrong. An investigation is begun by a detective she knows from her DA days. She discovers, upon reading the partially finished novel, elements of Charlotte’s real-life experiences. Ellen begins to delve into the characters of the novel, attempting to determine if they exist in reality and could help Ellen find her sister. There is a desperate race to locate her sister as each passing day lessens the chance Charlotte will be found alive.

Throughout the story, Ellen’s portion is told in the first person. The understanding of Charlotte is presented and developed in the first person as the central character in the partially completed novel. The remainder of the book is also in first person for other characters. The largest portion of the story is spent with Ellen, which immerses the reader in her fears and anxieties as she tries to understand the disappearance of her sister and help locate her. The plot moves quickly and develops multiple possibilities, each of uncertain significance until the final shocking, rapid resolution. Dead Certain is a very good read.