Fetch: How a Bad Dog Brought Me Home by Nicole J. Georges 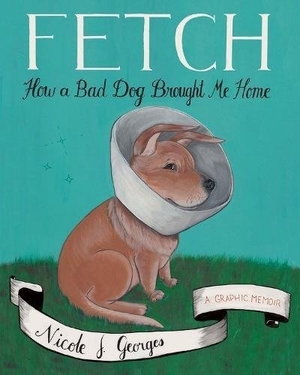 Everyone remembers their first dog. No, not the first dog they ever owned, their first dog. The one they first had an instant connection with; the dog who made them feel complete and opened their heart in ways unexpected. There is, perhaps, no greater joy in the world. Fetch: How a Bad Dog Brought Me Home is an autobiographical graphic novel, written and illustrated by Nicole Georges. In this story, Georges introduces us to Beija, a dog she owned and loved for fifteen years. She illustrates Beija’s faults and flaws; the (at times) tumultuous experience of owning said canine. In going through her history and relationship with Beija, Georges also shares stories from her childhood, her move out to Portland, the growth of her sexuality, and finding her way to adulthood. Fetch is an often funny, constantly touching story for graphic novel fans and dog lovers alike.

It’s hard not to fall for Beija immediately in Georges’ retelling of her once-was pet. Beija is anxious, quick to bark, hates children, pees on carpets – in short, she would be seen by almost anyone as a bad dog. But as the story progresses, readers find a sweet, gentle nature to her that Georges so easily accepts throughout her life. In Beija, the artist sees herself. Most readers will probably see themselves in Beija as well.

Fetch is presented in a standard fashion. Readers are first introduced to Georges and Beija in present times, then are taken back to Georges’ sixteen-year-old self when she first met the strange looking pup. The story moves on from there: Georges adopts Beija as a gift for her then-boyfriend, they attempt and fail to go to college, the three move out to Portland, Georges works on a farm, she dates several men and women, etc. etc. Intermittently, readers are given short segments wherein Georges retells growing up with a somewhat absent mother, a couple mediocre father figures, her much older sisters, and her untamed love of all animals. Readers are given an acute picture of Georges in her youth, to help lay the foundation of the main story at hand and help better understand her as a person and why Beija means so much to her.

Georges is a wonderful storyteller, putting her life on page with ease in order to entertain and hook her audience. Her artwork is terrific; a unique sketch-like style that is all her own. Fetch is drawn entirely in the same fashion, except for in the childhood segments, for which Georges reverts to a more child-esque design to benefit the story at hand.

The only downside of the entire book is the ending. While Georges is relating actual events and one is glad she didn’t fabricate much in the conclusion, it feels almost anticlimactic in a way. Without spoilers (though the ending most people probably can guess), it all sort of comes to a halt and ends abruptly. While this reviewer certainly wouldn’t want the ending changed, it perhaps could have benefited from a bit of a punch up when textually wrapping up what Beija really means to Georges and how the dog bettered her.

Otherwise, Fetch is lighthearted, devastating, humorous, and touching all at once. In experiencing this graphic novel, readers are reminded how dogs bring out the best in people. The relationship between a dog and an owner is, in many ways, the purest form of love, and in that sense, one can’t help but fall madly in love with this book.