Prayer For The Dead: An Inspector McLean Novel by James Oswald 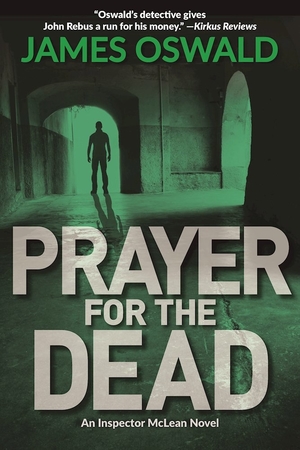 Inspector Tony Mclean finds himself working on a case of a missing journalist, one who wrote a scathing article about a fellow officer in the recent past. Not fully vested in this case, McLean’s direction changes when he discovers a very bizarre and nightmarish murder at the Gilmerton Cove. This place is a snare of underground caves and passageways underneath the town of Edinburgh. McLean recognizes the victim as his missing journalist. With very few leads, Tony finds himself involved with another murder that he feels is somehow linked to the first. Within three weeks and three murders, the team is rattled by the lack of forensic evidence at each crime scene. McLean strongly feels these cases are all the mastermind of one criminal, but his theory is being pushed aside.

This is the fifth book in The Inspector McLean series written by James Oswald, a Scottish writer. This is the first book that this reviewer has read in this series, but felt that the novel holds up as a standalone book and was a good murder mystery. The author included many twists and turns to hold this reader in suspense through most of the novel. He used plenty of forensic information and descriptions of police procedures, which was interesting due to the setting being based in Scotland. His plot was very fast paced with blended mixes of stagnant investigations, shifty developers, fortune teller Madame Rose, and religious beliefs. The plot kept with routine police work but also bordered on the paranormal edge a bit. This novel is filled with strong and flavorful characters throughout the story who rattle off good and colorful banter between themselves. This reader will look forward to the next adventure in this series!