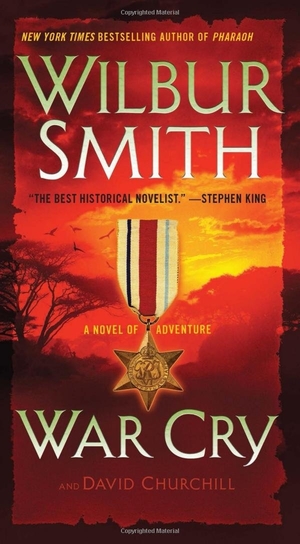 War Cry is a Courtney Family epic, the fifteenth novel in the series. New in this series is Saffron Courtney, daughter of Leon Courtney, the big-game hunter in Africa. In this post war story, Saffron is growing into an inquisitive young lady who rides horses like the wind and shoots a gun like a soldier! Growing up on a ranch on a beautiful Kenya estate, she flourishes as she is watched over carefully by her proud father. Her continued search for knowledge leads her to further schooling in England in her teenage years. Growing more beautiful each day, she loves discovering new relations who also help her rediscover herself. Eventually she is pulled into the center of the changing European world and the new threat of dominance by the new German leader, Adolf Hitler. The Courtney Family gets involved with war efforts when they find their family empire is threatened by German hierarchy. Having met and fallen in love with a German on one of her Christmas vacations, Saffron realizes that choices she made will have great impact on her family and her own future.

A stunning saga continues with War Cry. Wilbur Smith, creates a world of mysterious beauty in his descriptions of the Courtney estate and Africa itself. The characters are genuine, unique, and realistic. Smith has spun his dominate tale around the terrifying reality of brutality of a race, in the years of the rise and reign of Hitler. The author offers enough context that this is easily a standalone novel for readers who haven’t followed the earlier works in the series; this reviewer certainly had no difficulties jumping into the series here. The story will make a reader feel angry, anxious, and maybe tearful at times. It has many twists and turns in the storyline and is quite a page-turner that is hard to put down!