The Western Star by Craig Johnson 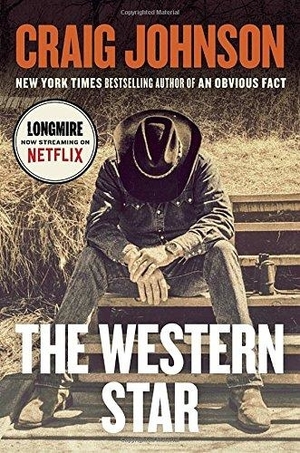 The Western Star is the most recent novel in the long running Longmire series. The book is presented in two parts, with the narrative shifting between the past and present. In the present, the sheriff of Absaroka county, Walt Longmire, travels to Cheyenne Wyoming to attend a parole hearing of a prisoner he had arrested a number of years before. He is there with his deputy, his retried former boss, and his best friend, all staying with his daughter and granddaughter. Walt discovers there is some significant “fire power” being brought to bear in an effort to parole this individual, which he opposes. The story element from the past occurs in 1972 when Walt has several months earlier joined Lucian Connally as a deputy sheriff. A steam locomotive, “The Western Star,” was used from 1948 for an annual trip and gathering of the sheriffs of Wyoming. During this trip one of the sheriffs is killed and Walt becomes the major investigator as he is the one sheriff they can trust.

Throughout the narrative there is movement between past and present, sometimes requiring the passage of a few lines before recognition of the change. Ultimately there is a third aspect that brings all of the sections together for the conclusion of the book. Walt struggles through the clues, action, and the false leads to discern those responsible. The interplay between Walt and his world (Lucian, Vic, Henry, and Cady) is there, but is limited and secondary to the time spent in the past before these relationships develop. Overall the book is very good and clearly is a setup for the next one. It is highly recommended for those individuals who have not read any preceding books to not begin with this one, but existing readers of the series are likely to be well-satisfied with Walt’s most recent adventure.