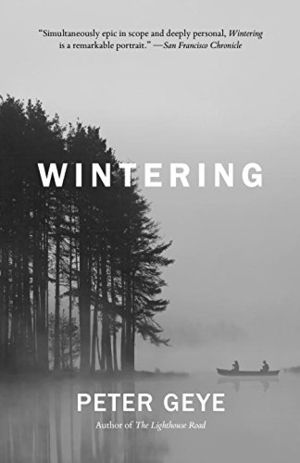 Harry Eide has gone missing down the frozen river in the town of Gunflint, Minnesota. When Gus Eide learns his father is missing and presumed dead, he hurries over to inform Berit Lovig of the news. Berit has shared the past thirty years of her life with Harry as his friend and also as his lover. This loss of father, brings forward personal and emotional feelings for Gus that he thought had been suppressed. He begins to open up with Berit about his feelings as the two of them try to make sense of Harry’s life and of his death. Their story spans over a few months. Gus describes in detail the adventure he had with his father when he had just graduated from high school and took a river run down this same river in the middle of winter. Gus explains that he thought the adventure was to spend time together, but found out late in that winter that his father was in trouble and was hiding out. Gus was always bothered about that time in his life. Berit explained the reasons why she and Gus had stayed together. Through their sixty years of stories, Gus and Berit learn more about Harry than either had previously known. They learned that Harry’s life was complicated by family feuds and transgressions, secrets, and even by love.

Wintering, by Peter Geye, is a continuation of the family saga from Lighthouse Road. The characters woven into this story are well developed and are complex individuals. The setting of this Minnesota town and surrounding area is visceral and vividly describes the breathtaking beauty of the frozen rivers that run through Lake Superior and the various trees and plant life along its banks. This is an emotional story of love between a father and son on a treacherous journey. It is also a love story between two young teenagers who met but did not reconnect until later years. At times, the story was a bit grim in the details, but this reader found it a hard story to put down and walk away from – a telltale sign of a great novel!