A Horse Walks Into a Bar by David Grossman 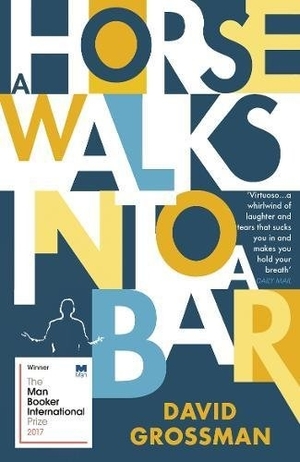 Onto a small nightclub stage steps a fifty-seven-year-old “stand-up” comic (Doveleh Greenstein), who spends the next several hours telling a few straight forward jokes, audience insults, self-flagellation, and fills the rest of the evening with his life story. He has invited a former contact from his youth to the performance and asks him to evaluate it. Throughout the performance, Dov is constantly moving from reliving his childhood, his time in youth military camp, his mother and her problems, his problems with school mates, his father’s interactions and problems with him, all of which is an interminable, prolonged, protracted, and painful journey for the reader.

At the completion of the story one can only look back at the described suffering of the “comic,” the visitor evaluating him, and the audience with a sense of discomfort, torment, minimal humor and a feeling of relief at its termination. It is recognized that this story does present issues such as an individual’s self-examination of his life, the impact of the losses in one’s life, and the impact of world events on parents of the second world war, yet it is such a difficult experience to sit through and to some extent to care about. As described in the story by the loss of the patrons during his presentation, you may find yourself walking out before the last words of the book.