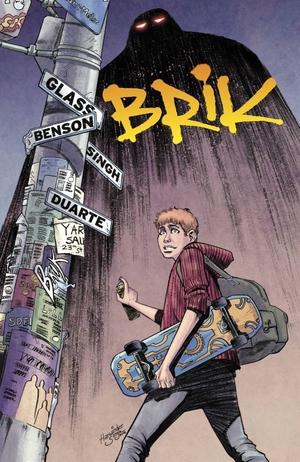 Brik is the story of a young, Jewish boy – named Drew – living in modern-day Yonkers, New York. After his grandfather is killed because of anti-Semitic gang violence, Drew decides to create a Golem to protect his city and the ones he loves.

The Golem is a supernatural creature steeped in legend and tradition. In Brik, creators Adam Glass, Michael Benson, and Harwinder Singh have managed to mold a very old tale into a modern and relevant new story. Like many a young comic book hero, Drew must learn how to best use the power he has (i.e. control over Brik) for the good of his community, while also finding a way to avenge the murder of his grandfather.

As Drew single-mindedly works to create a creature that he believes will protect him and his loved ones, the reader is left to ponder the moral grey area of the vigilante. While Drew ignores the warnings of those more knowledgeable than himself, the reader is constantly left on edge, waiting for the moment when things go wrong. Drew soon learns that things are not always what they seem, and finds that he has to take responsibility for his actions.

In this coming of age story, Drew is forced to face the consequences of his hatred and thirst for vengeance against those that killed his grandfather. Brik is an imaginative take on the Golem myth and is a story that will resonate with many readers.