Law and Vengeance by Mike Papantonio 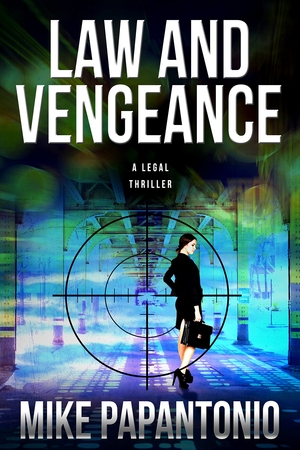 A law firm takes on the case of a whistle-blower whose employer’s company manufactures electronic sights for small arms. This results in the firing of the employee and denial of defective equipment on the part of the company. During the exploratory efforts by the law firm, the lead lawyer, Angus Moore, and partner Gina Romano are involved in an automobile crash resulting in the death of Angus and hospitalization of Gina with severe injuries requiring she being placed in a drug induced coma. While the official evaluation of the death is an accident, Gin’s eventual recollection is vastly different. As Gina begins her recovery she takes on the position of lead lawyer and begins her evaluation of the case. With the progression of the case as she begins to take on major players it becomes more dangerous to Gina who is pressured to stop or settle. Her efforts take on increasingly less than legal tactics and border on personal vengeance.

From review of the author’s information he has had significant experience “handling mass tort cases throughout the nation,” is a senior partner in his law practice and would therefore have significant experience as a plaintiff’s lawyer in civil trials. That seems to be apparent to a non-lawyer reviewer in his descriptions of the processes involve in such actions, including depositions as manifested in this story. Despite this knowledge and ability, the tale was difficult to enjoy as a thriller/mystery. In the beginning chapters multiple characters are introduced by jumping from one to the other without significant linkage. It is not until about the 8th or 9th character is introduced that it become somewhat clear as to who the major players are. The story is told by a narrator who not only presents what is happening and said, but constantly digresses into the characters memories and thoughts in what appears to be an effort to give them substance, but frequently has little bearing on the story line. The book reviewed is an “Uncorrected Proof” and contains 326 pages divided into 43 chapters with an average length of 7 pages, which makes it a bit choppy. Additionally, there is a title for each chapter such as (“Welcome to the New O.K. Corral,” “The Hovering of Angels and Vultures,” “Crime and Punishment and Therapy,” “Guns Don’t Kill,” and “Quick Draw.” While cute, the multitude of short chapters and the “tongue in cheek” titles are a distraction. Throughout the book the reader is subjected to a plethora of sayings and quotes such as “didn’t seem to have gotten the memo,” and “they say that laws are like sausage – it’s better not to see them being made,” which quickly became annoying due to sheer frequency and didn’t add anything to the narrative. Lastly, the reference to a talk show “Ring of Fire” hosted by Sam Seder and Robert F. Kennedy, Jr. seems a bit self-indulgent as this author is actually a co-host of said radio program. Unfortunately, this could have been a very much better story.