My Brother’s Destroyer by Clayton Lindemuth 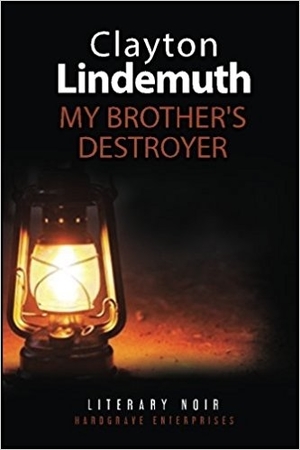 My Brother’s Destroyer by Clayton Lindemuth is not a book for everyone. Probably not for most people, honestly. From the dog fights with explicit wound descriptions to some mildly incestuous behavior to the nigh unreadable hillbilly vernacular of main character Baer Creighton, there is a lot in this novel that is simply awful to get through. Frankly, though, that shouldn’t be all this book is judged by. Sometimes fiction has to be awful in order to reflect the awfulness that exists in reality. It is not a book that most audiences will enjoy, but it is a well written book.

After the theft and mutilation of his dog and best friend, Fred, the high school dropout, fifty something, moonshiner Creighton begins a series of escalating conflicts with local leader, businessman, and crime boss, Joe Stipe, and his dog fight loving, man-code-loyal, walk of life townsfolk. In the meantime, Creighton tries to get a handle on his feeling for his many years past ex-girlfriend Ruth while protecting his niece Mae, a struggling college student and single mother of three, who happens to be Ruth’s daughter, from her drug addled baby daddy, the local sheriff’s son and Stipe’s lackey.

Through strong, believable characters, a thoroughly fleshed out setting that you could live in (but wouldn’t want to) and a dark, well-paced plot, Lindemuth has made a story where the black/white dynamic between right and wrong, good and bad, is skewed so far into the grey that there is no coming back, for any of the characters. There are only a few things that really read as rather odd additions/choices to this story, the most blatant being the sole supernatural twist; during a teenage fight with his brother Larry, Creighton is badly electrocuted and can now tell when people are lying through the sensation of shocks and the glowing red of their eyes. This inclusion, while treated fairly well on a purely technical basis, seemed generally out of place and unnecessary. The other minor issues would contain too many spoilers.

Again, this book gets violent, has animal cruelty, and a lot of ‘redneck’ behavior so may not be for all readers, but if you have the stomach for it, it could be worth your time.