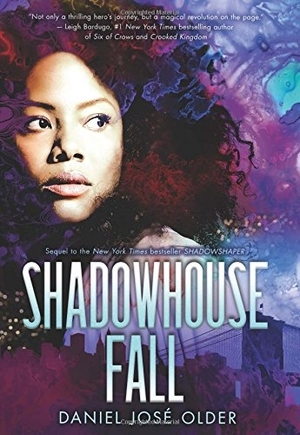 Sierra Santiago is not the average teenager: she has taken on her family’s legacy of being a shadowshaper – someone who can command spirits through art. Since Sierra learned of her talents and taken her first steps to become a fully skilled shadowshaper, she has been busy gathering and training her friends to become shapers as well. Sierra knows that something bad is coming and that the blow she dealt to the House of Light was only the first play in an ongoing war. Sierra must work to outsmart the House of Light before they destroy her and the shadowshapers themselves.

Shadowhouse Fall, by Daniel José Older, is the sequel to his outstanding urban fantasy, Shadowshaper (and it’s follow-up novella Dead Light March). Sierra is a unique heroin who is full of confidence, intelligence, and sass. While Sierra has grown in her skill as a shaper, in this book the reader sees her challenged to become a leader and to grow into her role as the head of the shapers. The characters are all lively and unique in the book and each brings their own set of skills to the shaper group. There are no throwaway characters in this novel; each is fully realized and important to the story. The writing is tight, focused, and well-paced. The setting of the book – Brooklyn – comes to life in these books. The reader gets to experience Sierra’s culture and neighborhood in both its triumphs (bringing their music to life) and struggles (racism, police abuse and brutality). This book is particularly relevant given the current cultural and political situation going on in the country at this time. Fans of urban fantasy absolutely must read this new book in The Shadowshaper Cypher series.