Why?: What Makes Us Curious by Mario Livio 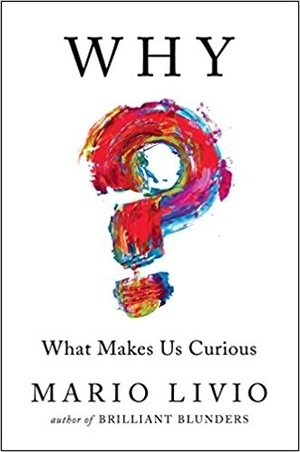 Huffington Post Blogger, Astrophysicist, and all around curious guy, Mario Livio is the author of five previous books on physics, mathematics, as well as over 400 scientific articles. Why? What Makes Us Curious is his first foray into the world of popular science/cognitive science books.

In recent years books like Thinking, Fast and Slow by Kahneman, The Power of Habit by Charles Duhigg, and Stumbling on Happiness by Daniel Gilbert, along with the entire oeuvre of Malcolm Gladwell and the guys over at the Freakonomics brand, have created a genre that dominates the best-seller list. The market is currently flooded with books that look to explain something fundamental regarding human life. Livio’s book looks to find its home among those books, but the author doesn’t know if he wants his book to be for a scientist or the casual reader and the result is a very mixed read.

Why? Starts with an overview of the science of curiosity, which Livio explains is a very understudied genre. The author walks us through a few examples to underscore how curiosity works, most notably using a Kate Chopin short story to emphasize his point. The opening chapter is an engaging bite sized chunk.

Livio follows up his intro with two case studies, one of Leonard Da Vinci and one of Richard Feynman. The Da Vinci section is interesting, and a good short riff on the subject. The Feynman chapter doesn’t work as well. The section is a bit physics heavy and portrays Feynman as a bit of a jerk. Livio circles around the relationship between curiosity and creativity that makes for an entertaining read, but he doesn’t land on anything definitive.

The following chapters all read like short scientific articles; they lean a bit too heavily on research and lack an exciting narrative. While Livio is a strong research writer he never hits that sweet spot we have come to expect from these types of books. Sections on “Information Gap Theory” and the difference between “specific” and “divestive” curiosity are inherently compelling, but the writing is a bit too repetitive and clunky.

Why? What Makes Us Curious is a decent primer on the current science and study of curiosity, but he book doesn’t dazzle like Gladwell or Gilbert, the narrative is too disjointed for that. This is a short book that will whet the appetite of fans the pop science/psychology genre, and leaving them craving something more substantive and definitive.