Arabella and the Battle of Venus (The Adventures of Arabella Ashby) by David D. Levine 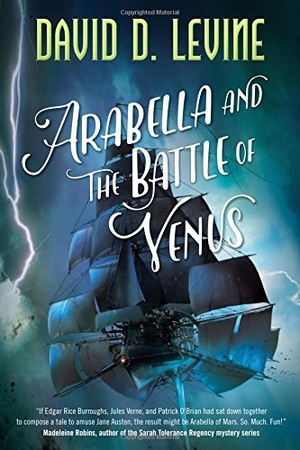 Levine’s sequel to Arabella of Mars resumes several months later, with Arabella separated from her fiancé, Captain Singh. Singh and the crew of his ship, Diana, have been captured by the French and sent to work at one of Napoleon’s war camps on Venus. Upon learning that the French general and executioner, Fouché, is set to arrive in Venus, Arabella commissions a privateer, Fox, to fly her to Venus aboard his ship, Touchstone. After being captured by the French on their descent toward Venus, Arabella and her chaperone, Lady Corey, uncover the French’s plans for a weapon that would significantly tip the scales in Napoleon’s favor. Together, Arabella, the Touchstones and Dianas work together to escape from the prison camp and warn the English before it’s too late.

Levine’s second installment of the series does not disappoint. The medley of history, adventure, and steam-punk that made the first book a success, return here. Our heroine, an Elizabeth Bennett in her own right, adds a refreshing perspective to the period’s politics and societal norms. Her distinct voice and personality shine throughout the book. The only drawback to this is that since she is without significant flaws, she has less room for growth. As readers we’re initially too assured of her success. Consequently, when there are real consequences, they’re all the more shocking.

Readers of the first book should be warned, this is tonally darker than its predecessor. Despite the fantastical elements of the world, Levine succeeds in grounding the story through his realistic depiction of their circumstances and experiences as prisoners of war. The series matures alongside Arabella, mirroring her growth through tone and content. The middle of the book occasionally lags in its absence of action. However, once it’s evident how all elements of the story converge, it’s worth the wait. A satisfactory conclusion leaves the door open for further adventures.