Island of the Blue Foxes: Disaster and Triumph on the World’s Greatest Scientific Expedition, by Stephen R. Bown 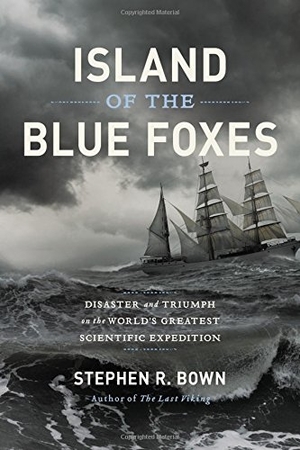 I read this well-written, fast-paced historical documentary in (almost) one sitting, with (near the end) Tchaikovsky’s great Fifth Symphony surging along in the background (on Oregon Public Radio) towards its dramatic conclusion. Both the Russian expedition and Tchaikovsky’s symphony were composed in St. Petersburg, Russia – the former almost a full century and a half before the latter. Both reflect a dynamic age of momentous storm and drama that defines the Tsarist era.

A great expedition to the North Pacific was the dream of Tsar Peter Alekseyevich Romanov, before he died. It was preceded by the short-lived and largely unsuccessful First Kamchatka Expedition in the 1720s. The far more dramatic and scientifically challenging Great Northern Expedition was carried out from 1733 to 1743. The author describes it as “a monstrously complicated octopus of an expedition, with its competing demands, interests, and objectives.” It’s leader, Vitus Bering, he writes, had to cope with the “chasm” that existed between what was expected and what was possible to achieve. The Great Northern Expedition was an “incredible enterprise.” It cost the Russian government a huge sum and ultimately became “one of the Age of Sail’s darkest tales of shipwreck, suffering, and survival.” In retrospect and despite the immense difficulties encountered, it goes down as one of history’s greatest expeditions in terms of the naval challenges confronted and survived (barely), and the scientific knowledge that was amassed.

To explore the Pacific cost an exorbitant amount of time and energy. It began with a long siege afoot, by horse-drawn sledge, barge, and river boat, hauling tons of necessary supplies from St. Petersburg east across road-less Siberia to the Kamchatka Peninsula on the Pacific. It was there that Bering built his two ships, the St. Peter that he would command, and the St. Paul captained by Aleksei Chirikof. Soon after they set out together to cross the Pacific, however, the two ships became separated and never linked up again. The author of Island of the Blue Foxes deals largely with Bering’s part of the story.

To write it, Stephen Bown worked with the immense amount of information that survived the disasters that were suffered, including scurvy, storms, and other misfortunes, which killed a large number of the crew. That we know what happened is due to the detailed journals and notes, some of which have only recently been published, written by Bering’s second in command, Lt. Sven Waxell, and the expedition’s naturalist, George Wilhelm Steller.

As brilliant as he was, George Steller, was an ambitious young scientist with an acerbic and self-serving personality. Not being a naval officer worked against him, for the ship’s officers saw the expedition as primarily a naval exercise to be run strictly according to naval practices and rules. They refused to listen to Steller’s prattling wisdom and advice, despite his remarkable understanding of the natural environment both at sea and ashore that could, at times, have been used to save the expedition leadership from numerous misguided judgments. To this day, however, Steller’s scientific discoveries are widely lauded, including North Pacific Russian and Alaskan coastal flora and fauna and the discovery of new species, all described in copious detail.

In the end, despite numerous set-backs, Steller became a hero by saving many lives, and comforting others in the throes of death. He determined the cause of scurvy, and developed primitive treatments, including anti-ascorbic teas and salads from green plants and other sources, which he made into healing concoctions and literally poured down the throats of the very sickest of the officers and crew. Steller also served during the most difficult of times as the ship’s pastor, tending to the spiritual needs of others as they withered away and died.

The author, Stephen Bown, does a masterful job of telling the story, with particular focus on Steller’s remarkable role. Bown’s writing is based on many highly detailed sources including Steller’s and Waxell’s notes and journals, and the interpretive writings of many historians.

The Island of the Blue Foxes is recommended for history-buffs, especially those interested in Tsarist Russia and the age of exploration and scientific discovery, and any who like action-packed historical nonfiction.