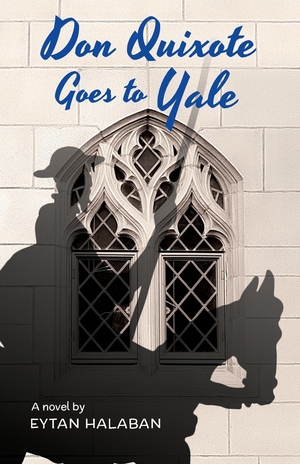 Michael is the kind of college student who seems to have it all. He’s got good friends, a loving girlfriend, is getting decent grades, and has largely been making good decisions… until now. Boomie – someone only Michael seems to be able to see – has put it into Michael’s head that parts of the plot in Don Quixote are real; in particular, the parts having to do with hidden treasure! Michael is so taken in by the possibility of a treasure map hidden within a classic work of literature that instead of spending spring break with his girlfriend in St. Thomas, he decides to go to Spain in order to track the long-lost treasure down. Unfortunately, Michael isn’t the only one interested in the treasure. What follows is a humorous adventure filled with theft, attempted blackmail, kidnapping, bad acting, and extremely lucky coincidences.

This is one of those books that may not make much sense from the summary, but is a wondrously whimsical read once you dive into the story. The characters are pretty standard, with most being the expected caricatures based on their age and story purpose. Boomie as a character feels contrived and out of place due to no one questioning his existence, particularly when Michael could have stumbled his way into this quest by himself. With the addition of Boomie, readers will wonder the whole time if Michael is insane, dealing with a supernatural possession, or if this world has some strange magical realism; whether or not this works for the reader is a personal preference. While Michael’s scene visualizations are an interesting plot device and certainly helps readers unfamiliar with Don Quixote visualize the scene, it doesn’t help a sanity plea.
However, despite the somewhat bland characters (with the exception of Boomie and Michael) they aren’t likely to cause much of a problem with immersion since the focus of this book is the plot and its many twists and turns rather than the characters themselves. The book has some extra appeal for those who have read Don Quixote, although there is plenty to enjoy for people who aren’t readers of classic literature.

The final few chapters are the book’s weakest part, which is unfortunate as the ending left me rather unsatisfied and, while it didn’t ruin the enjoyment I felt up to that point, certainly tarnished the experience. Without spoiling anything, the few final chapters ended up rushing events, and relied heavily on sheer luck and happenstance. The very last chapter was certainly cute, suggesting a continuation of sorts with regards to the character Boomie and his strange purpose to lure literary students on treasure hunts, but who or what Boomie actually is was never touched on.

Don Quixote Goes to Yale is an entertaining journey with plenty of charm; a great travel adventure for New Adult readers and people suspicious of the truths hidden within literature.