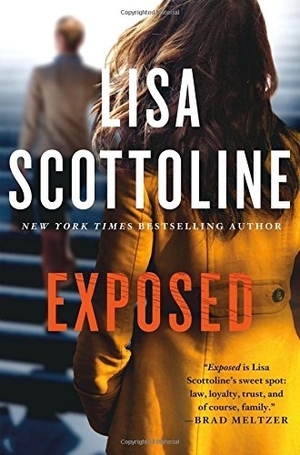 Mary DiNunzio is in her best form in Lisa Scottoline’s latest novel, Exposed. Needing Mary’s help in this thriller is Simon, a son of one of Mary’s “uncles” and so is considered “family” by all of Mary’s extended Italian family. Simon’s daughter has leukemia and is currently hospitalized in Children’s Hospital of Philadelphia, better known as CHOP. He was terminated at his office and feels it was unfair because he thinks it was due to his daughter ‘s healthcare bills. Mary immediately takes his case and then later learns from her partner, Bennie Rosato, that this case is a conflict of interest because Rosato represents the parent company of the one that Simon used to work for. Mary is so determined to help Simon that she considers leaving the firm, causing emotions to run high as they try to figure out how to deal with this conflict. As Rosato and DiNunzio pit themselves against each other, a jolting murder occurs that points blame towards Simon, though neither partner believes him to be the killer. Attempting to gain evidence to clear Simon brings unexpected dangerous consequences for both lawyers when they become targets themselves!

Lisa Scottoline is a New York Times bestselling author and she doesn’t disappoint her fans in this novel! Her theme of law and justice stretches to include loyalty and family. Her characters are so close to real life that the reader can visualize them easily and feel their emotions throughout the story. It is a fast-paced novel with twists that won’t disappoint and thrills that keep the reader engaged right through the last page. The author writes with wit filled with emotion, but also with sensitivity for meaningful subject matter to be found throughout the story. Fans of previous Rosato and DiNunzio novels will love the growth of the characters. This reader enjoyed Exposed and is looking forward to the next book in the series with anticipation!